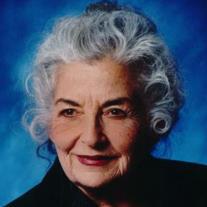 Andrea Carrillo Montoya passed away peacefully with grace in Albuquerque early Friday morning, February 13th surrounded by loved ones. A long journey back to her beginning. Born in  1923  the 7th of 9  surviving children in Agua Fria, NM to Filberto and Maria Carrillo,  the essential tasks of survival were to raise children, care for animals,  tend crops and provide spiritual guidance.  Going to school was regarded as a treasured opportunity, not an obligation.  It is these circumstances and values that would shape her and those she touched. By the time she graduated from Santa Fe High school in 1941, she had been offered a 4 year 4H scholarship to New Mexico State University.  Her Dad forbade her to accept , as college was no place for a woman.  Instead, she found employment as an office assistant in the Department of Agriculture. She then met a military man and future husband, Ralph Tomas Montoya. Several years later she was a wife and mother of two sons. Determined to provide the best possible future for her family, she found a way to  navigate and adapt to new conveniences, technologies and social diversity, while maintaining the beliefs and values handed down from her parents. Over decades, accommodations were made, bending never breaking to stresses and opportunities of a modern life.  Compromise was rarely part of her solution, raising two more children. Gaining confidence and a new realization of choices as an independent woman, she was a entrepreneur, rancher and realtor.  She spent several decades compiling her geneology dating back to the 1500's, yet her most peaceful times were spent on her ranch,  tending to the cattle, fixing the houses, mending fences, and talking about making improvements until her death at the age of 92. She was a Founding Member of the Associates of the Blessed Sacrament, a member of the Catholic Daughters of America, New Mexico Geneology Society and a long-time active member of Queen of Heaven and St. Charles Borromeo Parish. Regardless of her environment, she was the happiest when she was connected to the earth, her family, and her Creator.  Her grandchildren gave her tremendous joy and treasured memories.  She will be deeply missed by those she touched and mentored. Her charm, wit, independence, drive, graciousness and loving nature became a moniker of her elderly years  which will leave a legacy through family, friends and caregivers. She is survived by her children, Ralph Gilbert Montoya, Michael Anthony Montoya and spouse, Chris Montoya, Joseph Ronald Montoya, Maria Dolores Preciado and spouse, Lupe Preciado; grandchildren Rudolfo Montoya and spouse Charity Montoya, Glynis Montoya, Gabriella Preciado, Joaquin Preciado; sister, Anita Salazar; and many, many nieces and nephews. She was preceded in death by Marcia Byers, Romalda Neeb, Amelia Carrillo, Rudy Carrillo, Manuel Carrillo, Antonia Lerma, Filiberto Carrillo, and Lucinda Garcia. Visitation will be Wednesday, February 18, 2015 beginning at 5:00 PM with the Rosary following at 6:00 PM. at Strong-Thorne Mortuary, 1100 Coal Avenue SE.  Mass will be celebrated at St. Charles Borromeo, 1818 Coal Avenue SE at 10:00 AM on Thursday, February 19, 2015 with the burial following at Mt. Calvary Cemetery. To view information or leave a condolence, please visit www.danielsfuneral.com
Strong-Thorne Life Events Center
1100 Coal Ave SE
Albuquerque, NM 87106
505-842-8800

To order memorial trees or send flowers to the family in memory of Andrea Montoya, please visit our flower store.