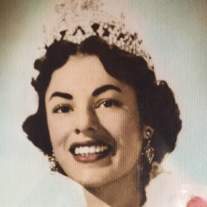 Angela T. Oyaca was born October 30th 1935 and passed away peacefully on February 28th 2017. She is preceded in death by her mother Carmen Oyaca, brother Larry Oyaca and father Pete Oyaca.

Angela, graduated from the Loretto Girls Academy and later attended Northern Colorado in Greeley. In 1954 Angela was the Santa Fe Fiesta Queen. Angi then work for Tony Hillerman at the New Mexican.  Later she went to work for both the Attorney General and the Bernalillo County district attorney as a consumer advocate.

In January 1988 Angi suffered a stroke which she bravely battled until her passing.
Angi is survived by her children  son Marc Ortiz and daughter Gabrielle, son Martin Ortiz, daughter Marquita and her son Peter,  Marlisa Gomez , husband Ray, daughter Monica and son Lorenzo, and  great-grandchildren Ezekiel and Isaiah.  Special friends in Arturo and Sandra Rodriguez, and Lenore Alarid .


To order memorial trees or send flowers to the family in memory of Angelina Oyaca, please visit our flower store.