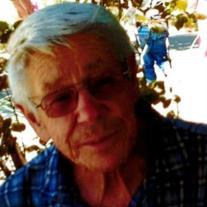 Griego, Armando
Armando Griego, 81, passed away on Saturday, August 15, 2015. He was born on September 2, 1933 in Las Tablas, N.M to Belarmino and Madalena (Barros) Griego and was raised in La Madera, N.M. He graduated from Adams State University with a Bachelors Degree in Education. He was a hardworking man who often held multiple jobs along with his established career in education and as Director of Human Services for the State of New Mexico. He taught all levels of education from elementary to high school in northern New Mexico and Alaska. He also worked at Bataan (now Lovelace) Hospital in New Mexico and Kaiser Hospital in San Francisco. After retirement, he continued to work at the Saturn dealership and JC Penney. Family was one of his highest priorities, second only to his deep and abiding faith in the Lord. He was a longtime parishioner at Immaculate Conception Catholic Church. His greatest joy came from engaging in his children's, grandchildren's and great-grandchildren's activities. Even last week, he could be seen playing with his grandchildren in the yard. He returned to his Lord and Savior only after a beautiful day with his wife, buying groceries for their home and after a meal and cup of coffee. He gently returned to his creator and redeemer. He will be remembered for his helpful, encouraging, hardworking, funny, quiet, and humble demeanor. Mr. Griego was preceded in death by his sons, Locario "Lucky" Griego and Steve "Billy" Griego; brothers, Frank Griego and Gabriel Griego. He is survived by his wife of 57 years, Vivian, of Albuquerque; children, Gregg Griego, Raul Griego and wife, Annabel, Theresa Parlante, Anthony Griego and wife, Louise, Charles Griego, and Mizel Griego, all of Albuquerque, NM; Grandson Andres who holds a special place in his heart and 19 other grand children; 12 great-grandchildren; siblings, Carolina Carillo, Herman Griego, Mary Pena, Bert Griego, Arturo Griego, and Elifar Griego; and many nieces, nephews, cousins and other family members and friends. Viewing and Visitation will be held from 5:00 PM until the Rosary begins at 7:00 PM on Friday, August 21, 2015 at Strong-Thorne Chapel, 1100 Coal Ave SE, Albuquerque. The Mass of Christian Burial will be celebrated at 10:00 AM on Saturday, August 22, 2015 at Immaculate Conception Church, 619 Copper Ave NW, Albuquerque, with Fr. Eric Ramirez, S.J. Celebrant and Fr. Dennis Garcia Co–celebrant. Interment will follow at Mt. Calvary Cemetery, Albuquerque. Pallbearers will be Gregg Griego, Raul Griego, Anthony Griego, Mizel Griego, Charles Griego, Joseph Griego and Gabriel Griego. Honorable Pallbearers: Dominic Griego and Brian Parlante. To view information or leave a condolence, please visit www.danielsfuneral.com
Strong-Thorne Life Events Center
1100 Coal Ave SE
Albuquerque, NM 87106
505-842-8800

Your browser does not support this video format. You should be able to view it in Chrome, Safari or Internet Explorer.
To order memorial trees or send flowers to the family in memory of Armando Griego, please visit our flower store.