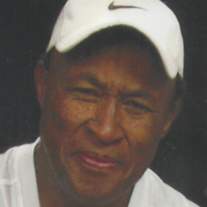 Baty, Arthur
Arthur Baty 73 of Albuquerque, New Mexico passed away Monday March 6, 2017 at his home.
Arthur was born March 14, 1943 in Clarksville, Texas to L.B. Baty and Edgar Bell Baty.
Arthur moved to Albuquerque in 1950 and attended Albuquerque High School, where he played basketball and ran track. He graduated in 1962. Arthur began working for Furr’s (later became Smith’s), in his late teens, until he retired in 2007, giving 44 years of dedicated service. After he retired, Arthur spent most of his days taking care of his home he shared with his wife, and attending to the needs of his neighbors and friends. Arthur always made himself available to help others, and give of his time regardless if it was requested or not. He truly was a selfless spirit, who touched many souls that will now live on forever.
Arthur is preceded in death by his parents L.B. and Edgar Bell Baty, grandparents Tom and Elizabeth Baty, and son Arthur Jerome Baty.
Arthur is survived by his devoted wife of 44 years, Patricia A. Baty, his children Debra Smith, Arthur Baty Jr. and spouse Vicki Baty, Maria Serna, Audrey Baty, Tina Connally and spouse Milton Connally, Robert Johnson and spouse Debra Johnson, and Michelle L. Baty-Lewis and spouse Tyron Lewis. He is also survived by his only sibling J.C. Baty and spouse Ethel Baty. Arthur also leaves behind many grandchildren and great-grandchildren to his honor. Arthur also had many loving aunts, cousins, nieces, nephews, and extended family. Arthur was a caring, giving, and loving father, husband, grandfather, and friend to all. Arthur was very proud of his family and their accomplishments. Arthur had many loving and devoted co-workers and friends along the way over the years, who were dear and true to him as he was to them. He will truly be missed by all. Arthur had many quotes he stated over the years and these are two of the most remembered:
“This ain’t my first rodeo” and “I love you, you love me, we’re a happy family”

To order memorial trees or send flowers to the family in memory of Arthur Baty, please visit our flower store.