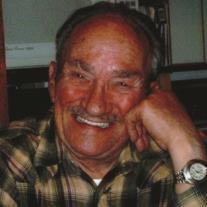 De Poi, Arthur
Retired Chief Petty Officer Arthur De Poi, CADRC, US Navy, age 83, was called home to our Lord and Savior on Wednesday, May 6, 2015. He was born on November 4, 1931 in the Bronx, NY. He very proudly served in the US Navy and retired in 1967. Arthur continued to serve others by working with the City of Albuquerque as a mechanic for the Albuquerque Police Department. There are two words that sum up Arthur's beliefs: service and patriotism. His hobbies included fishing and he was a proud and longtime member of the NRA. He was preceded in death by his nephew, BCSO Deputy James "Jimmy" McGrane, brother, Dino Giannini, mother, Julia Glusko, brother Allen De Poi. and aunt, Virginia De Poi, who passed away just a day before him. Arthur is survived by his loving wife of 31 years, Armida (Giannini) De Poi, of Albuquerque, NM; children, Roger Brothers and wife, Vicki, of Albuquerque, NM, and Patricia Chiado and husband, Pat, of Albuquerque, NM; grandchildren, Kurt Chiado, Cinzia Chiado, and Raquela Chiado; great-grandchildren, Andolina and Marianela Salgado, and Raelin Chiado; nieces, Chris Pothier, Catherine Weiler and Sandra De Poi; nephew, Arthur De Poi; in-laws, Alice Miller and husband, George, Rita McGrane and husband, James, Charles Giannini and wife, Mildred, Albert Giannini and Virginia Giannini. Viewing and Visitation will be held from 9:30 AM until 10:30 AM, with the Rosary followed by the Prayer Service to begin at 10:30 AM on Monday, May 11, 2015 in the Chapel at Mount Calvary Cemetery, 1900 Edith NE, Albuquerque. Interment with Military Honors will immediately follow. In lieu of flowers, the family kindly encourages that donations be made to the Officer Street Survival Training at www.deputymcgrane.com or by mailing to Deputy James McGrane, Jr. Officer Street Survival Training, P.O. Box 37337, Albuquerque, NM 87176-7337. To view information or leave a condolence, please visitwww.danielsfuneral.com.
Strong-Thorne Life Events Center
1100 Coal Ave SE
Albuquerque, NM 87106
505-842-8800

To order memorial trees or send flowers to the family in memory of Arthur DePoi, please visit our flower store.