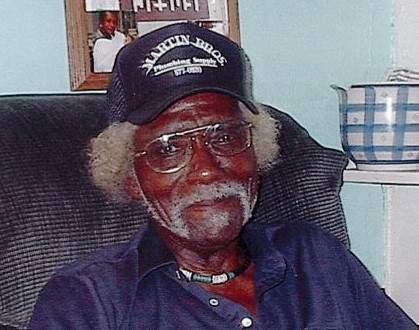 Arthur “Jack” King, Sr., was 96 years old when he was called home on Friday, November 24, 2017.  His family and friends are heartbroken, but grateful that he was able to grace everyone that knew him with his loving and quiet presence for many, many years.

Born in Many, Louisiana, on March 23, 1921, Arthur was the youngest of 10 children.  His parents, George King and Emily Armstrong, preceded him in death, as well as his loving wife of 60 years, Elzora McCully King, his sons, Luster Kiel, Kenneth King, Arthur King, Jr., and his granddaughter, Dana Kiel.

Also known as “Jack”, Arthur moved to New Mexico in the early 1950’s.  He married and raised his family in Albuquerque while working at Duke City Lumber for 30 years.  He was a longtime member of Metropolitan Temple Church of God in Christ and became a Deacon as well as a Charter Member of the church.  Arthur was in his ‘90’s when he stopped driving to church in his brown pickup truck.

Arthur loved to sit in his recliner to watch, “Let’s Make a Deal” and “The Price is Right”, every day before heading to the Thomas Bell Center to eat lunch and play dominoes with his friends.  He loved to watch his “church programs” on Sunday and watching sports throughout the week was Arthur’s favorite pastime.

The spirit of the Lord surrounded Arthur throughout his life and the joy of his life was being with his family and friends.  His graciousness, laughter and love will be sorely missed.

To order memorial trees or send flowers to the family in memory of Arthur "Jack" King, please visit our flower store.