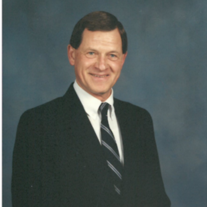 August Roedell Schmitt of Rio Rancho, NM passed away on January 6, 2016. Born in Liberal, KS March 13, 1932 the youngest of five children born to August C. Schmitt and Mildred E. Schmitt. During The Depression and Dust Bowl days, the family moved to Farmington, NM in 1935 and continued the family tradition of farming. He grew up on the family farm and graduated from Farmington schools in 1950. He continued his education over the years earning credits in seven different colleges and universities eventually earning a Bachelor's Degree in Public Administration and a Masters and Doctorate Degrees in Ministry.
He was active in local government serving on the Farmington City Council, San Juan County Manager, Executive Director San Juan Council of Governments, State President of the New Mexico Association of Counties. He was the founder and pastor of Zion Baptist Church in Ignacio, CO. At the time of his passing, he was a member of Mesa Baptist Church of Rio Rancho.
He is survived by his wife, Esperanza, of the family home; daughters, Margaret Jeanne Barnes, of Ignacio, CO, Patricia Rae Evans, of Albuquerque, NM, Jan Adell Peel, of Farmington, NM; son, Joseph Schmitt, of England; 16 grandchildren; 16 great-grandchildren; and a host of friends and relatives.
Viewing and Visitation will be held from 9:00 AM until the start of the Funeral Service at 10:00 AM on Saturday, January 9, 2016 at Mesa Baptist Church, 1411 Golf Course Road, Rio Rancho. Interment will be follow at 1:30 PM at Vista Verde Memorial Park, 4310 Sara Road SE, Rio Rancho. Pastor Jeff Carr is in charge of services.  To view information or leave a condolence, please visit www.danielsfuneral.com
Strong-Thorne Life Events Center
1100 Coal Ave SE
Albuquerque, NM 87106
505-842-8800
To order memorial trees or send flowers to the family in memory of August Schmitt, please visit our flower store.