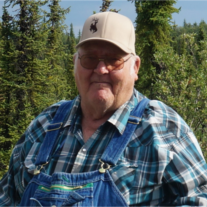 Beryl “Butch” Donney Mahana, age 77, went to hunt and fish in more bountiful fields and streams August 7, 2017. He was born Feb. 11, 1940, in Arapahoe county in Denver, Colorado, to Donald and Dorothy Mahana. Butch was the second of three children.
On June 20, 1959, he married the love of his life, Ollie Donetha Elkins. They had three children, Jeannine Jones, Shannon “Rusty” Cordova, and Kimberly “Porky” Mahana.
Butch drove trucks for 27 years with United Packing in Denver, Colorado. After the plant closed, he went into business for himself, driving long hauls across the country. Sometimes his daughters would get to go on the hauls, where they learned valuable lessons on packing a month's worth of clothes for a “weekend trip.”
Eventually, Butch and his family moved to Kremmling, Colorado where he opened a gas station and auto mechanic shop.
Butch retired from running the auto mechanic shop after suffering a heart attack in 2000. But that did not stop him from tinkering in his shed to make new and inspired items, such as the centerpieces for his granddaughter Sheridan’s wedding or steel knives with elk-antler handles.
Always an avid fan of the outdoors, Butch and his family spent their free time hunting, fishing and camping. The passion he had for the open sky of Colorado was passed on to all of his grandchildren and his great-grandchildren.
On several occasions, Butch journeyed to the frozen north to try his hand at hunting caribou and fishing for salmon. At one point he and his granddaughter, Mercella, traveled to Alaska during a three-month vacation. There Butch and Mercella spent time with his grandson Shane Jones and his wife, Leesa.
A few years later, Butch went for one last trip to Alaska to see Shane and Leesa, accompanied this time by his family, Jeannine, Duane, Shannon, and two of his great-grandchildren, Bruce and Cirenda Cordova.
He was preceded in death by his parents, his older sister Sue Erickson, his wife of 40 years Ollie Donetha Mahana, and his daughter Kimberly Mahana.
Butch is survived by his sister Rita (Robert) Kirby, and daughters Jeannine (Duane) Jones, Shannon (Jose) Cordova; grandchildren Henry (Amy) Cordova, Shane (Leesa) Jones, Sheridan (Brad) Myer, Bud (Lucas) Cordova, and Mercella Cordova; and three great-grandchildren, Bruce and Cirenda Cordova and Penny Myer.
Services will take place August 17, 2017 at the Kremmling Community Church in Kremmling, CO at 11:00 AM.