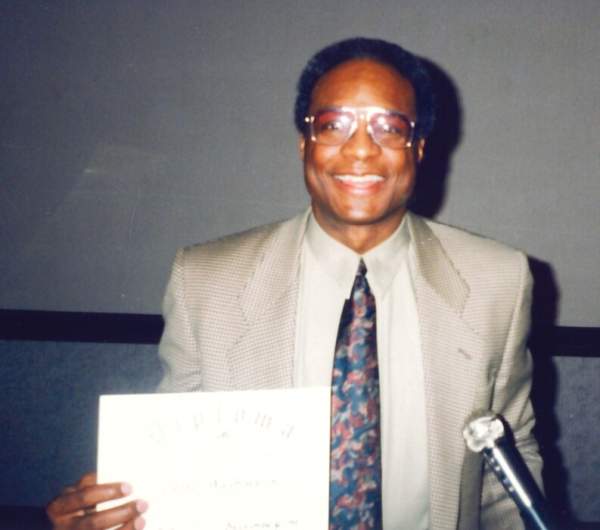 Jackson, Carl  Edward
Carl Edward Jackson was born in Kansas City Kansas on May 12, 1945. He was the third of four children born to Howard Lee Jackson, Sr and Marie Jackson. His parents preceded him in death and he is survived by his wife, Janetta Rose Houghton - Jackson, brothers, Rev Howard L Jackson Jr ( Calliope), Rev Elmer E. Jackson ( Claudia), Sister, Eleanor Marie Monroe (Tony), his two sons, Carl Jackson and Joel Jackson; and two grandsons Ty and Niko, many nieces, nephews, cousins and other family members.
Carl went to Douglas grade school, Central junior high and graduated from Wyandotte high school in KCK where he was a string Quartet gold medalist and a concert violinist in the Kansas City Philharmonic Orchestra. He also was a Letterman at Wyandotte High School in Basketball and Football.
He attended Independence community college on a basketball scholarship and changed over to football. He was recruited by Don Perkins of the Dallas Cowboys to play football on a scholarship at UNM where he set several records and was an Honorable Mention All American.
While at UNM he created  an administrative level department directly under the vice president of student affairs and was the departments first Director.
He developed an alumni student recruitment program for the top 10% of academic high school students in metro Albuquerque which also included the establishment of an educational awareness center adjacent to Albuquerque High School. He was recognized with a student service award from the vice president of student affairs.
He earned a BA in Recreation and Sociology and a Master’s Degree in Counseling Psychology!
He was the first black alumni to serve on the Alumni Board of Directors.
In 1987 he founded the UNM Hall of Honor and was its first president. He was presented with a plaque of recognition for outstanding service and contributions. He was also the first black president of the UNM Lettermen’s Association.
In 1989 he was UNM’s Centennial Homecoming Chairman.
Community involvement included consulting and counseling with the Juvenile Detention Center in Albuquerque where he had served as an Intake Officer; the division of vocational rehabilitation in Albuquerque and the Job Corps for Women in Albuquerque and Washington DC, along with White House Conference for Children and Youth, Community Counsel and a Halfway House for Run-away Girls, Boston.
His employment at the City of Albuquerque allowed him to use his skills for which he had studied. He was the program Director for Martinez Town community center in Albuquerque and then began working with the Parks and Recreation department where he was a special programs assistant and then Assistant superintendent of Parks and Recreation. He created the Albuquerque Softball-Baseball Hall of fame, started the boxing program in Albuquerque and brought in Muhammad Ali as a guest speaker.
After enduring the, “Most protracted civil rights litigation in the history of the US,“  as referred to by an attorney magazine in New York, he was appointed as the Associate Director of Cultural and Recreational Services where he was also awarded the Quality New Mexico award by Governor Gary Johnson and Senator Pete Domenici.
Upon his retirement he enjoyed world travel, watching and interacting with God’s creation in proximity to his home on the Bosque and was referred to as " The Guardian Of The Bosque!"

Thanks to the Doctor's, Nurses and Techs that took care of Carl at UNMH and special thanks to Dr. Nir, Dr. Brown and Ashley Yoder for their phenomenal expertise and care:

In lieu of flowers donations may be given in Carl 's honor to . To view information or leave a condolence please visit www.danielsfuneral.com
Daniels Family Funeral Services
1100 Coal Ave SE
Albuquerque, NM 87106
505-842-8800

To order memorial trees or send flowers to the family in memory of Carl Jackson, please visit our flower store.