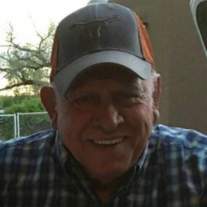 Carl Edward Smith, born July 9, 1942, passed away on November 16, 2016. Carl is survived by his wife, Sandy, of 39 years; his children, Tamara Nuanes, Brian Smith and Stella Helms, Diana Smith and Anthony Azevedo, Chad Smith, Ashley Smith, David and Michelle Warren; his grandchildren, Victoria and Larry, Isabella, Haley, Monroe, Nikolai, Enoch, Michael, Nicky and David, Jr.; and many nieces, nephews and extended family members. Carl was preceded in death by his parents, Carl Albert Smith and Virginia Elizabeth Hunton Smith; and brother, Leon Smith. Following in his father's footsteps, Carl became a member of the Plumbers and Pipefitters UA Local Union 412 at the age of 16 and remained a member for the past 58 years. He was the owner of Car-San Plumbing and Heating for 33 years until his retirement. Carl was proud to have played football in high school with his brother, Leon, at Rio Grande High School. Carl began rodeoing while in high school and became a bull and saddle bronc rider and toured on the rodeo circuit. He was an avid fisherman and hunter who loved the outdoors. Above all, Carl was a loving, dedicated and loyal son, husband, father, grandfather, uncle and friend to all of us and will be greatly missed. He has left us with memories of his love, kindness, smile, laughter, and many fun-filled camping, fishing and hunting trips. In lieu of flowers, the family requests donations in his memory to St. Jude Children's Hospital at www.stjude.org, the Wounded Warriors Hunting Camp at www.whhcamp.org, or the charity of your choice. Memorial Services will be held at 2:00 PM on Saturday, November 26, 2016 at Strong-Thorne Chapel, 1100 Coal Ave SE, Albuquerque, NM. A reception will follow in the The Vintage Room at Strong-Thorne immediately following the service.  To view information or leave a condolence, please visit www.danielsfuneral.com
Strong-Thorne
1100 Coal Ave SE
Albuquerque, NM 87106
505-842-8800

To order memorial trees or send flowers to the family in memory of Carl Smith, please visit our flower store.