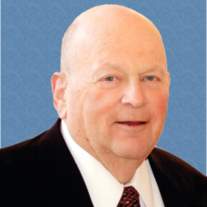 Charles Nachman Glass passed away on November 22, 2016. He is survived by his best friend and wife of 60 years, Sydney; two sons, Dr. Louis Glass of Phoenix, AZ, Phillip Glass, an Instructor at the University of New Mexico, his daughter-in-law Dr. Theresa Grebe of Phoenix, AZ and two grandchildren, Amanda Helen Glass and Benjamin Karl Glass of Phoenix.
Charles was born in Milwaukee, Wisconsin but moved to Chicago when he was 7 when his father, Ben Z. Glass, became Executive Secretary of District 6, B’nai B'rith, a position he held for more than 30 years.  Growing up in Chicago, Charles graduated from Nicholas Senn High School in 1950 and began his college education at Northwestern University in Evanston, Illinois.  After 2 years at Northwestern, he transferred to the University of Illinois at Champaign-Urbana where he met his life mate at Hillel.  He graduated Summa Cum Laude from UI in 1954 with a Bachelor’s degree in Economics,.  He continued his post graduate work at the University of Michigan Law School.  In 1956, he and Sydney married the day after she graduated from Roosevelt University.  Charles passed the Michigan bar prior to his graduation from Law School under a special provision in Michigan’s Korean War Bill. Graduating in June 1957, he began the practice of law in Detroit.  On January 3, 1958 his application for a waiver of his 4F status was approved and he was inducted into the US Army as a first lieutenant in the Judge Advocate Corp.  He was, under the regulations then in effect, sent to Fort Bening, Georgia for basic training as a Platoon leader.  During one night maneuvers class, he asked if there were any snakes in the area.  This singled him out (it being a cold winter night and snakes being cold blooded) and he was assigned to White Sands Missile Range.  He arrived there and was immediately assigned the job of Range Safety Officer as well as prosecutor, defense counsel and legal aid attorney.  He passed the NM bar in 1959 and was released from active duty in January 1961.
Charles, Sydney, their son Louis, and Syd’s mother moved to Albuquerque where he became assistant city attorney.  He fulfilled his military duty by joining the Army Reserve.
In 1963, shortly after the birth of his son Phillip, Charles joined the firm of Threet, Threet, & Glass where he remained as a senior partner for 17 years.  He then formed his own law firm, finally retiring on December 31, 1999.  In the 1970’s he served as secretary and then president of the Albuquerque chapter of B’nai B’rith.  In 1977 he was elected to the board of trustees of Congregation B’nai Israel serving on that board as its president from 1980 to 1982.  He remained on the board until 1984.  He was named Congregant of the Year in 1991. After his retirement from the practice of law, he served as a volunteer for Congregation B’nai Israel.  He was Yahrzeit notice chairman, volunteer office receptionist and returned to the board in 2007 as secretary.  He also served for many years as Vice President for the North Albuquerque Acres Community Association.  In lieu of flowers, the family requests that donations be made to Congregation B’nai Israel or the Alzheimer’s Association.To view information or leave a condolence, please visit www.danielsfuneral.com
Strong-Thorne
1100 Coal Ave SE
Albuquerque, NM 87106
505-842-8800

To order memorial trees or send flowers to the family in memory of Charles Glass, please visit our flower store.