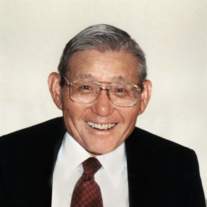 Charles Matsubara passed into Enlightenment on February 5, 2016. He was affectionately known as “Uncle Charlie” by his numerous nieces, nephews and friends. “Uncle Charlie” was born in San Francisco, California on June 3, 1920 to Daikichi and Toshi Matsubara. With the Japanese attack on Pearl Harbor on December 7, 1941, Uncle Charlie and his brother were classified as Enemy Aliens, even though they were U.S. Born American Citizens. They were incarcerated at the Manzanar War Relocation Center in 1942 until the U.S. Government deemed it safe for him to be released to begin rebuilding his life. He Married Mary Masako Saeda on November 7, 1954 and she continued to be his loving wife until his passing. Uncle Charlie is best known as a farmer who produced quality Green Chili, Corn, Squash and Melons for many years which he sold from the family store front on North Fourth St. He was also an avid Lobo Fan having held season tickets in the Pit from the time it opened until his health forced him to follow the Lobos from Home.
He was preceded in death by his Father Daikichi, Mother Toshi, Brothers Frank and George.
He is survived by his wife Mary Masako, sister Anne Ayako Shibata, niece Nancy Matsubara-Ohama and numerous other nieces, nephews, grand nieces, grand nephews and friends.
A celebration of Charles Matsubara’s life will take place on March 12, 2016 at 10:00AM at Daniels Family Funeral Home located at 7601 Wyoming Blvd NE in Albuquerque, NM.
To view information or leave a condolence, please visit www.danielsfuneral.com
Strong-Thorne Life Events Center
1100 Coal Ave SE
Albuquerque, NM 87106
505-842-8800
To order memorial trees or send flowers to the family in memory of Charles Matsubara, please visit our flower store.