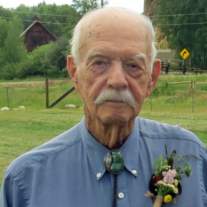 Clay was born in Magdalena, NM in 1923 and passed May 11, 2017.  During his childhood he spent winters with his mother in Amarillo and summers with his father in Magdalena, NM. He worked as a bellboy and a ticket seller at the local theater. After graduating from High School he attended trade school to learn sheet metal work, machine shop and rock masonry. In 1941 he moved to Albuquerque and worked at the Air Depot Training station as a draftsman and attended night school at University of New Mexico studying Mechanical Engineering.

He proudly served in the Army Air Corps, the Air Force and the New Mexico Air National Guard, as a founding member, for a combined 32 years. He flew missions in WWII, China, Burma, India Theater and Korea. During his years of service he piloted 32 different planes; the P-38, P-51, F-86 and F-100 were a few of his favorites. Following is a snippet of his history.

At 19, in 1942, Clay wanted to enlist, yet was under weight. He ate 6 pounds of bananas on his way to Santa Fe for the physical to gain the 2 pounds necessary to meet the 130 lb. requirement to go on Active Duty.

After flight training he was off to serve with the 10th Air Force, 33rd and 58th Fighter Groups in 1944. He flew in Karachi, followed by Northeast India then onto Burma; flying 75 missions in India in the P-38 then 100+ hours combat time in the C-46 from Chittagong, India hauling ammunition, gasoline, etc., into Mandalay and Meiktila area, Burma. He was released from Active Duty in November 1946 and returned to Albuquerque to again attend the University of New Mexico.

He joined the NM Air National Guard in 1947 and remained in Albuquerque until he was called back to Active Duty in January of 1951. He was assigned to the 34th Air Division at KAFB. During this time in Albuquerque he met and married the love of his life, Ruth. Their honeymoon was a trip to California where Clay was off to Korea; spending 23 Days on a carrier carrying F-86’s. He flew 100 missions over North Korea according to the records, yet he relates he flew 101 missions "because I could". He also flew support missions in the C-47 and AT-6, with the 5th Air Force, 4th and 336th Fighter Groups and the Goon to Iwo Jima.

1952 saw him back in the States for AT-6 Instructor School and T-33 upgrading, after which he was again released from Active Duty. In October he became the 188th Air Tech Maintenance Officer with the NMANG.

In 1957 he went part time with the ANG and worked for the new Airport Paradise Hills where he was a flight instructor. In October that year he was in a plane crash in Salida, CO sustaining burns which kept him hospitalized for a few months.

He returned to the NMANG in 1958 as a maintenance officer until he became the Commander of the 188th Flight Squadron which became the 150th Fighter Group.

In 1961 he became the Chief of Staff of the NM Air Guard. From there he was assigned to the National Guard Bureau at the Pentagon until 1964. He then went on to the Air War College in Maxwell, AL for a year during which time he received the rank of Colonel; after which he returned briefly to the NMANG in Santa Fe, NM.

He then served as the Air Guard Liaison Officer to Air Defense Command in Colorado Springs until his retirement in 1974.

To the end he said "I’d do it again in a minute if they would have me".

He moved back to Albuquerque in 1976 to care for his stepfather, Brad, after the death of his mother. Still wanting to fly he worked transporting patients with the Southwest Med Air Transport, Wings of Angels, Turbine Air Charter and Seven Bar Flying service until age 70.

His love of flying didn’t stop there. He was very involved with the Commemorative Air Force and their rebuilding of the PT26 and the AT11, also serving as a Lobo Wing Commander. He also owned an Ercoupe, which he flew for many years. Beyond his love of flying he was interested in politics, collecting cars and land, as well as preserving family and aviation history.  He was instrumental in rescuing and preserving 3 planes which now reside in Museums. He was active with the EAA, CBI, Daedalians and QB’s.

He is predeceased by his mother, Winnie Jo; his father, Oval; his stepfather Brad; his ex-wife Ruth; and his son, Clay "C.O." He is survived by his daughter, Deborah; son, Cliff; and three grandchildren: Derek, Adam and Alyson.

Clay was a loving father, grandfather, friend, aviator and patriot.

There will be a short graveside tribute with Military Honors at 1:00 PM on Saturday, June 24 at the Fairview Memorial Park (700 Yale Blvd SE) followed by a Memorial Reception at 2:00 PM with a pictorial history, stories, music and food at the National Museum of Nuclear Science and History (601 Eubank SE). If you will be attending please contact Don and Diane at dljdlj@comcast.net or