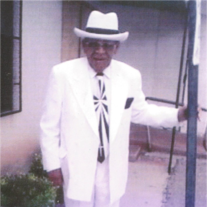 Dan Etherly born May 12, 1918, to Sonny and Melissa Etherly, in Rison, Texas.  He departed this life at the age of 98 on Tuesday February 7, 2017. A longtime resident of Albuquerque, New Mexico, he is preceded in death by his wife of many years, Cozetta Etherly, son Ray Etherly, Mother and Father, three brothers, and three sisters. He is survived by his loving wife for the past eleven years, Gwendolyn-Harris Etherly, one sister, Trudy of Oakland, California, one daughter, Bertha Bailey, five step-sons, Donnie, Kevin, Sydrick, Jason, Michael, three step-daughters, Gwen, Tamikia, and Ashley. Two grand-children, Bertha and Jack Edward, a host of other step grandchildren, great grandchildren, and friends, and grandchildren.
Dan was a member of Macedonia Baptist Church for over twenty years.  He enjoyed fishing and spending time with his family. Dan loved children and being around them.  Dan was one of the supervisors for the Macedonia Christian Recreation program for over fifteen years. He was the manager of the Macedonia Baptist Church Apartment Complex. Singing was not one of Dan’s gifts, but whenever the men’s choir would be on to sing, Dan would be there.  You could not hear him, but he would be there.  Dan loved the Lord and wanted everyone around him to have a relationship with Him.  Dan will truly be missed.
Visitation services will be held on Thursday, February 23, 2017 from 6-8pm. Funeral service will be held on Friday, February 24, 2017 at 12 noon. Both services will be held at Macedonia Baptist Church 1509 Edith Blvd SE.
Services provided by Strong-Thorne Funerals 1100 Coal Ave SE.

To order memorial trees or send flowers to the family in memory of Dan Etherly, please visit our flower store.