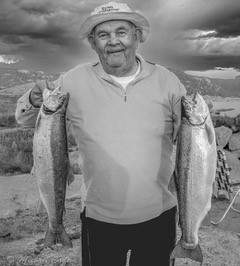 Daniel D. Skousen passed away on August 10, 2022 after a brave battle with dementia. Danny was born on October 4, 1929 in Mesa, Arizona. He was the son of Daniel D. Skousen and Betty Skousen, nee Tinsley. He was preceded in death by his first wife, Gayle Caldwell Skousen, and second wife, Jane Vinson Skousen. Danny was the proud father of four children, five grandchildren, and three great-grandsons. During his toddler years, Danny contracted polio, but was still able to quarterback all three years of high school and take Albuquerque High
School to the state championship. Sports later became an important mainstay during his 50’s. 60’s and 70’s. Tennis came naturally to Danny, and he picked up many trophies while playing for the Four Hills Country Club where he became a charter member in the 1960’s. Danny was a longtime resident of New Mexico, and attended the University of New Mexico where he was a member of the Pi Kappa Alpha fraternity. Following in his family’s footsteps, Danny became a road contractor. He was a member of the Associated General Contractors of New Mexico.
He will be remembered by his family and friends as someone who would do anything for you. His love of New Mexico’s high country was gratefully passed on to his children.

In lieu of flowers, Danny’s family would appreciate an act of kindness in his
honor. Dad would like that.

To order memorial trees or send flowers to the family in memory of Daniel Skousen, please visit our flower store.