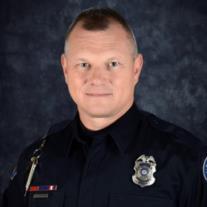 Officer Daniel Scott Webster's End Of Watch was Thursday, October 29, 2015, as his wife held him in her arms. He leaves us with a legacy that is filled with bravery, courage, service to country, and service to others. He was born on July 23, 1968 in Hillsboro, IL. He retired as a Sergeant First Class out of the 82nd Airborne division in the US Army after 20 years of dignified service. Dan then served nine years with the Albuquerque Police Department. He is survived by his wife, Michelle Carlino-Webster, of Albuquerque, NM, who describes their marriage as a "once in a lifetime kind of love." He is also survived by his father, Daniel Arthur Webster and wife, Sabina, of Litchfield, IL; grandmother, Eleanor Bain, mother, Gayle Hanafin, and husband, John, of Litchfield, IL; children, Rebecca Ingham and husband Johnny, Danielle Modrow, and Ashleigh Webster, all of Vinton, IA; grandchildren, Addyson, Jaxson, Sophia, Raelynn, Quincy and Braydon and Patrick; brother, Doug Webster and wife, Christy, their two children Adam and Elizabeth, of  St. Louis, MO; half-brothers, Joshua Webster and Nathan Webster.  Dan was a highly decorated military infantryman with awards to include two Bronze Stars.  Dan was a Jump Master with 112 jumps- this final journey is his 113th.  Dan served in multiple deployments and combat tours including Panama, Bosnia, Africa, The Gulf War I, and several tours to Iraq, Afghanistan and Kuwait.  Dan loved to be on his Harley, work in his garden, cook, play chess on his phone, and play with his new puppy, Sage, a very high energy German Shepherd.  Dan was a very private man and enjoyed his time alone with his wife and their dogs.  Lastly, Dan loved his job, and always went to work with a smile.  The Funeral Service will be held at 11:00 AM on Tuesday, November 3, 2015 at the Albuquerque Convention Center, 401 Second Street NW, Albuquerque. Those who are attending the service are encouraged to be seated at the Convention Center by 10:30 AM. Following the service, the Funeral Procession will travel to Vista Verde Memorial Park, 4310 Sara Road SE, Rio Rancho, NM for Honors to be presented. To view information or leave a condolence, please visit www.danielsfuneral.com.

To order memorial trees or send flowers to the family in memory of Daniel Webster, please visit our flower store.