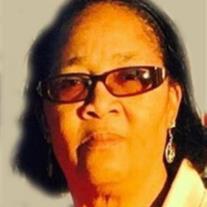 Debbie Ann Boxton was born to Welter and Gloria Boxton on December 28, 1957 at Presbyterian Hospital in Albuquerque, New Mexico. Debbie accepted Christ at an early age of 9 and was a lifelong member of Macedonia Baptist Church. She attended Albuquerque High School and graduated in 1975. She then began her career at the City of Albuquerque Library system, working there for 25 years until retiring in 2005. Debbie was a lifelong resident of Albuquerque, New Mexico.  She was called to eternal rest on May 26th in the year of our Lord 2015. She will be missed by all who knew her.
Debbie was a devoted mother, grandmother, daughter, sister, and aunt and all around best friend. She enjoyed spending time with her family, especially her grandchildren.  She also loved traveling, watching movies (especially those written and directed by Tyler Perry) and taking a few trips to bingo and the casino.
Debbie was the glue of her family and lived her life as a prime example of what family truly means. Her home was always open to family and friends and she was a second mother to many of her nieces and nephews.
Debbie leaves to cherish her memory her mother, Gloria Boxton; loving daughters, Natasha Boxton and Nicole “Nikki” Blackwell; son in law, Steven “Bo” Blackwell; grandson, Nehemiah “Neyo” Blackwell; granddaughters, Ney’Amari Blackwell, Ney’Amani Blackwell, and Ney’Amajai Blackwell; brothers, Welter Boxton Jr. and his wife, Flora Boxton, James “Chubby” Boxton and his wife Clara Boxton, Tarvin Boxton and his wife Corey Boxton and Chomel Boxton; nephews; Lamont Boxton, Taryll Boxton, Trumaine Boxton, Heshiri Boxton, D’angelo Boxton, Deandre Boxton, Ian Holiday and Tyson Holiday; nieces, Tyra Boxton, Tymarah Boxton and Caprice Boxton; several aunts and uncles and a host of other loving relatives and friends.
Debbie was preceded in death by her father Welter Boxton Sr. and her sister Gloria “Neesie” Boxton.
Debbie’s life will be celebrated in a funeral service on Tuesday, June 2, 2015 at Macedonia Baptist Church. Arrangements were provided by Strong ~ Thorne Chapel and Macedonia Baptist Church.

To order memorial trees or send flowers to the family in memory of Debbie Boxton, please visit our flower store.