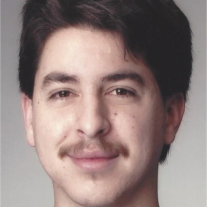 Dylan Army unexpectedly passed away early Saturday morning at home. He is much loved by his wife, Jamie and daughter, Mailin and parents, Dana Army and Sandy Escarcida.  His special Grandma, Frances Escarcida will always hold him in her heart as will his Aunt and Godmother, Elayne and his Uncle Abe.
Dylan was born on February 28, 1973 in Groton, Connecticut and lived most of his life in New Mexico. He loved the mountains around Placitas and loved exploring for pottery shards, fossils and unique rocks. Dylan enjoyed things of beauty such as plants, nature and the art of tattooing. He was proud of his tats! Like his namesake Bob Dylan, a non-conformist, Dylan lived life according to his own standards.
Dylan studied at the California Culinary Academy in San Francisco and became a pastry chef. He met his wife Jamie when they worked at the same restaurant in Alamogordo. Jamie caught Dylan’s eye and he wooed her with his pastries. They would have celebrated 13 years together later this month.
From the day Dylan’s daughter Mailin was born, he adored her and they were inseparable. Anyone who knew them well knew that she was her daddy’s daughter and where he went she went. Some of her fondest memories are playing with him at the park and their shared love of collecting action figures.
There will be a celebration of Dylan’s life on Tuesday December 20th at 3:30pm at Anasazi Fields Winery located at 26 Camino De Los Pueblitos , Placitas New Mexico.
Dylan, you are loved, missed and will always be in our hearts.

To order memorial trees or send flowers to the family in memory of Dylan Army, please visit our flower store.