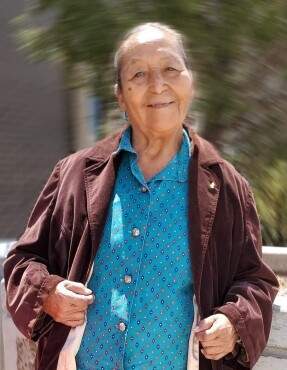 Eloisa Ingersoll
Eloisa Ingersoll went home with the Lord on February 17th, 2022. She was born to Steve and Katie Laveyana on October 30th, 1938 in Zuni, New Mexico and was the eldest of 4 children. She married her Husband Gary Ingersoll on March 5, 1979 Eloisa was hard working Care Giver; She was a Nurse Tech and worked at many hospitals all over New Mexico. She loved to travel for the Lord; She attended many revivals and was a member of Pastor David Terrell's Worldwide Revivals. She loved music and taught herself how to play the piano. She was a spirited member of New Hope Baptist Church. She was a joyful woman that loved to laugh and make others laugh too.
Eloisa was preceded in Death by her mother, father, husband, her bother-in-law Roy, and her younger brother Paul. She is survived by her brother David Laveyana, Sister Genevieve Sarracino, Son Terry Laveyana, Daughter Karen Perales, Daughter Andrea Anderson (Husband William), Daughter Adrine Laveyana and Son Darren Ingersoll. She is also survived by her Grandchildren Tanony Hernandez (daughter Misty, Husband Anthony), Ketra Anderson, Neonica Anderson (sons Kylo and Rylee), William Anderson (daughter Brielle), Kyle Williams, Chelsea Bjerga (daughter Oakley, son Aksel, Husband Konrad), Dominique Ingersoll (Daughter Serenity), Seth Ingersoll, and Anthony Hernandez. She also survived by nieces, nephews, cousins and friends.

To order memorial trees or send flowers to the family in memory of Eloisa Ingersoll, please visit our flower store.