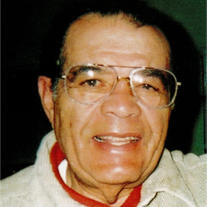 Earnest (Ernie) Buford Bailey was born in San Angelo, TX to the union of Jack B. Bailey and Ernestine E. Bailey on February 26, 1936.  Nicknamed “Jabo” by his father, Earnest lived in San Angelo throughout the fifth grade when his family then moved to Albuquerque, NM.
After graduating from Albuquerque High School, Ernie was enrolled at the University of New Mexico for two years.   He was twice drafted by the US Army in which he served a total of six years.  Upon exiting the Army with an honorable discharge, he gained employment with the City of Albuquerque at the Solid Waste Department.  He retired as a Supervisor after thirty years of committed and recognized service with the City.
Earnest met his former wife, Gracie Jeanne, in Albuquerque, NM.  They wed in June of 1967 and had two daughters, Jocelyn Nicole (Josh) and Ernestine Iva (Tina).  Ernie was a loving, protective, dedicated and responsible single- father who proudly raised his girls until they married.  Earnest willingly embraced the love and involvement of his girl’s maternal family.
Ernie was a God-fearing man of remarkably strong commitment and integrity.  There were two occasions when he was able to lose one-hundred pounds and regain his health and momentum.  He was a giving, kind, and compassionate man.  For several years after retirement he assisted in the delivery of baked goods from a local food pantry, visited the sick and shut-in, regularly attended God’s House and Legacy Church, and frequently blessed individuals and charities with monetary contributions.
Earnest remained very active in his community and Senior Center until his disability in May of 2011.  Even after his injury he continued to bless others with his amazing strength, positive demeanor, attentiveness and compassion in each facility where he resided.  Ernie loved to hike, walk along the Bosque, attend concerts and theatre performances, read, spend time with friends and loved ones and listen to Jazz and Classical music.
Earnest is preceded in death by his parents, Jack and Ernestine Bailey and brother, Jack P. Bailey.  He is survived by his two daughters and sons- in- law, Jocelyn and Ronald Kelly and Tina and Clint Coleman; former wife, Jeanne Bailey;  six grandchildren, Jaesha, Ronden, Isaac, Tenille, Justus, and Titus; Sister-in-law, Bertha Bailey; nephew, Jak  Bailey (Kristin); niece, Christine Bailey;  great-niece, Olivia Bailey and many others who respected, loved and cared for him.


Your browser does not support this video format. You should be able to view it in Chrome, Safari or Internet Explorer.
To order memorial trees or send flowers to the family in memory of Ernest Bailey, please visit our flower store.