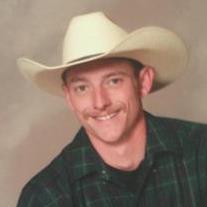 Ethan Alexander Noll, born August 21st, 1980 died on April 4th, 2015. Beloved husband, father, son, brother, nephew and uncle, he is survived by: his wife Erin and children Aidan, Bailey, Kellar, Wyatt, Clayton and a son due in June; parents Bruce and (Elizabeth) Betsy Noll, sister Hilary Noll and brother Lief Noll. Loving extended family include aunts, uncle, nephew, nieces and cousins.
Born in South Dakota, Ethan and his family moved to Albuquerque in 1995 where he attended Highland High School. He graduated with honors from St. John’s Military School in Salina, Kansas in 1999, and went on to serve our country in the United States Marine Corps (Amphibious Reconnaissance Battalion) at home and abroad. After returning to New Mexico, Ethan built an off-grid, passive solar stone house, married and was raising a family. He earned Associate’s degrees from CNM in Communication, Humanities & Social Sciences and in Applied Technologies where he became certified in welding, and started his own welding business.
Ethan was most at home in nature and strove for a simple, self-sufficient life close to the land. He enjoyed hunting, trapping and fishing. A loyal friend and natural leader, he was admired by many for his intellectual curiosity, musical and artistic talent and generous spirit. His broad smile and passion for life left a mark on those around him. Ethan was a devoted husband and proud and caring father who found his greatest joy in the arms of his wife and five children. The world has lost someone who had so much more light to share with us.
Donations for Ethan’s wife and children may be sent to the Ethan Noll Donation Account at any branch of Wells Fargo Bank.


Your browser does not support this video format. You should be able to view it in Chrome, Safari or Internet Explorer.
To order memorial trees or send flowers to the family in memory of Ethan Noll, please visit our flower store.