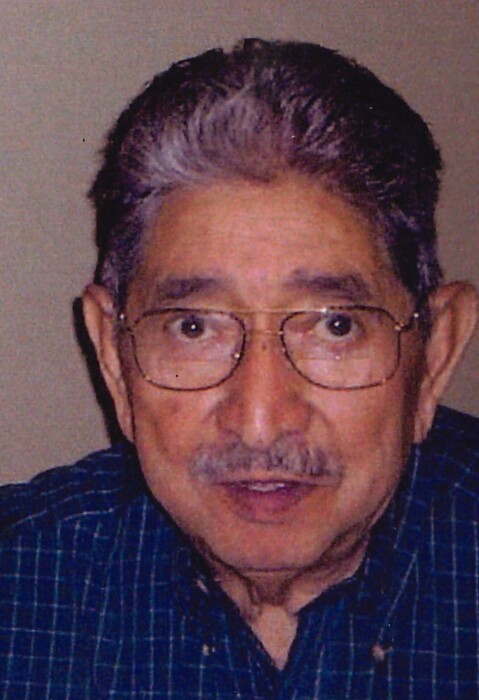 Francisco (Frank) Javier Garcia passed away on July 30, 2021 with his wife Ramona by his side. Frank was born in Fort Collins, Colorado on September 3, 1933.  Frank is survived by his wife of 66 years, Ramona, sons, Frank (Debra), Phil, daughter Michelle, daughter-in-law Carolyn, six grandchildren and nine great grandchildren, two brothers John and Pat, and one sister Mary.  He was preceded in death by his parents, Juan and Bertha, sister Della, brother Tony and son Bert.

From early on in life, Frank had a passion to excel with his education.  He also had a job to help support his family while going to school.  He was in student council, ran track and sang in the choir while earning good grades so he could go to college.  He and Ramona were high school sweethearts and married in 1954.  Frank enlisted and was stationed in Japan from 1954-1956.  When he returned from serving our country, he attended the University of Northern Colorado (Greeley, Colorado) to earn his Bachelor of Education degree. After earning his bachelor degree, he moved his young family to Los Alamos, New Mexico. While working as a teacher full time during the week in Los Alamos he also obtained a Master’s Degree. He completed his Master of Art degree at UNM in Albuquerque in 1972.He was an elementary teacher for many years and then was a principal at Mountain, Central, Aspen and Barranca Mesa elementary schools.  He even did a principal exchange program for a year in Kihei, Hawaii and where he made life-long friends. He eventually retired in 1989. In January 2002 he and Ramona moved from Los Alamos to Albuquerque to be closer to their family. They quickly became active parishioners at St. Jude Thaddeus Church. Frank and Ramona enjoyed traveling with family and making friends wherever they went.

Frank could always be counted on for - A good story, a quick wit, and consistently being there to help with projects that his kids were in the middle of; painting houses, building fences, tiling kitchens, planting gardens, helping the grandkids with their sporting activities and cutting his grandson’s hair for two bits.  What we will miss the most was his gift of telling stories.  The excitement in his eyes as he shared his life stories was priceless.  We will also miss his big hugs and scratchy kisses from his mustache.  You will be forever in our heart’s grandpa the great!

In lieu of flowers please donate to a charity of your choice in Frank’s name.

To order memorial trees or send flowers to the family in memory of Francisco Garcia, please visit our flower store.