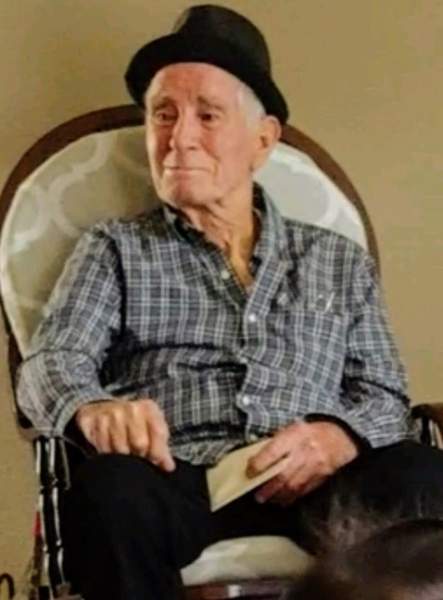 Fred G. Austin (Bampo) of Albuquerque NM passed away peacefully on Sunday morning, June 30, 2019.  He was born in Pastura NM to Pablita and Fred Austin on 11/01/28.  He was the youngest of 8 siblings.  Six sisters (Amelia, Grace, Lillian, Andrea, Mary, and Antonita), and two brothers (Jim and Isidro).  He was preceded in death by his loving wife (Daisy).  Survived by his son Gilbert Austin and Dora, daughters:  Carol Ayala and her husband Carlos Ayala, Karen Varela and husband Chris Varela.  He has 7 grandchildren:  Vicente Ayala, Glenn Chavira, Natalie Ayala, Jason Chavira, Denise Chavira, Gabriela Austin, and Frederico Austin.   He is also survived by his great granddaughter, Anastacia Diaz whom he referred to as the Goo Goos.  He served in the Army, was an Iron Worker, and owned his own business (Austin’s Carports).  He was an amazing son, husband, father, uncle, and grandfather.  He was strong, kind, dedicated, creative, loving, and patient.  He devoted his life to providing for others, and spent most of his spare time helping his family and friends.   He was not only a great husband and father, but a favorite uncle to most of his niece and nephews because he took time to recognize their needs and did what he could to improve their life experiences.  He liked tinkering in his garage, traveling, riding his motorcycle and RV, and entertaining family.   He lived to age 90 and outlived his wife, parents, sisters, brothers, and most of his friends.  We nicknamed him the energizer bunny.  Thank you daddy for being you.  We love you very much.

To order memorial trees or send flowers to the family in memory of Fred Austin, please visit our flower store.