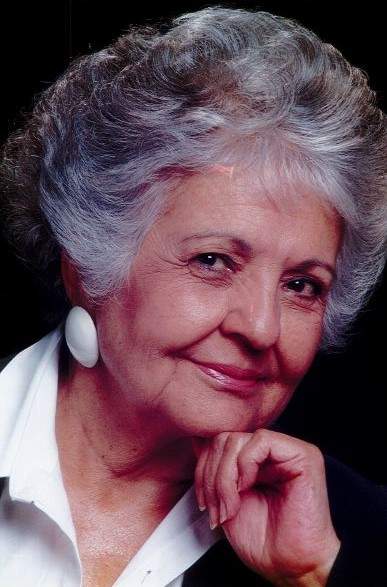 Frieda M Montoya, daughter of Emiliano Montoya and Sarafina Montoya was born in Albuquerque, New Mexico on October 14, 1923. She spent the early part of her life living in southern Colorado as her father worked for the then Santa Fe railroad. She attended the La Junta Business College for two years. Frieda returned to Albuquerque at the age of 18 where she lived for the rest of her life. Frieda was united in holy matrimony on June 20, 1945 to the love of her life Frank W Montoya. This union was blessed with two children. Frieda’s work history involved serving the people of the United States. She had positions at the War Department, Department of Labor, U. S. Department of Health Service, Department of the Army, Department of Energy, Veteran’s Administration, Department of the Treasury, and the Department of the Air Force. Also during her career, Frieda served as Federal Women’s Program Manager, chairperson for the Federal Women’s Program for all of the federal agencies in the Albuquerque and Santa Fe area; taught programs in transactional analysis and assertiveness training for the Department of Energy and Los Alamos Scientific Laboratory; authored a publication “Upward Mobility for Women” utilized by the Department of Energy; at the Veteran’s Administration she was administrative assistant to the director of the VA medical center in Albuquerque; Frieda was executive director of the Albuquerque-Santa Fe Federal Executive board which oversaw 52 federal agencies. Frieda was nominated and selected to Who’s Who of American women of which only two of ten thousand women received that honor in 1984. Frieda was also nominated and selected for the International Intellectuals and Who’s Who among Hispanic Americans. Her outside activities included perfecting her public speaking skills elevating herself to the level of Distinguished Toastmasters of which only 5% receive this certification. Frieda was a member of the Albuquerque’s speaker’s bureau, member of the American Society for Public Administration. Frieda taught as a Weight Watcher instructor for many, many years. Frieda was a devout Catholic and donated her time and skills as a lector and Eucharistic minister at St Charles Borromeo Church. Her beautiful life will forever be cherished in the lives of her children. Frank W. Montoya and Maxine C. Berea. She is survived by her husband Frank W. Montoya, Maxine C. Berea, Jose Berea and grandson Richard Berea, Frank W. Montoya DDS and Dianna R. Montoya DDS, sister Ruth Montoya and many nieces and nephews. A Memorial for Frieda is to be held on Monday, March 4, at 6:30 pm in the chapel at Strong-Thorne Mortuary (Daniels Family Funeral Services), 1100 Coal Ave. SE in Albuquerque. In lieu of flowers it is the families wishes that a donation be made to the Alzheimer’s Association. The association may be contacted 24-7 at 1-800-272-3900. Donations can also be made by mail. Alzheimer’s Association, P.O. Box 96011 Washington, DC 20090 -6011. And lastly by internet at alz.org.

To order memorial trees or send flowers to the family in memory of Frieda Montoya, please visit our flower store.