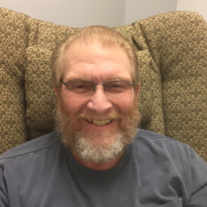 
Richards, Garry F.
Garry F. Richards, 56, passed away on Wednesday, March 16, 2016. He was born on March 16, 1960 to Ronald and Sherrill Richards in Norwalk, CT. He was a loving husband, father and grandfather who had an incredible sense of humor.  His heavy Maine accent was easily recognizable and contagious. He had a great singing voice, too. He was a craftsman by trade who believed strongly in quality work ethics. His motto was, "Improvise, adapt and overcome." Garry loved the outdoors, fishing and hunting. Garry was extremely proud of his son, Ronald's service to our country by serving the US Army. Ronald was deployed to Iraq. He and his son, Garry shared a love of race car driving. His racing colors were red and white and his number was "00." He was so proud to be the crew chief for his son. He is survived by his wife of 33 years, Kathy O. Richards, of Albuquerque, NM; mother, Sherrill Abrams and husband, John, of Monmouth, ME; children, Ronald Richards and wife, Alicia, of Rio Rancho, NM; Garry Richards, II., and wife, Janelle, of Rio Rancho, NM; Aaron Manzanares of Albuquerque, NM; Jason Manzanares and wife, Stephanie, of Albuquerque, NM; grandchildren, Ariana, Andrea, Samantha, and Zyon Manzanares; a grandbaby and a great-grandbaby who will soon arrive; siblings, Susan Mosher and Judy Kemp; and "Uncle" James E. Garner. A Memorial Service will be held at 1:30 PM on Thursday, March 31, 2016 at Strong-Thorne Chapel, 1100 Coal Ave SE, Albuquerque. Inurnment will follow at Fairview Memorial Park.   To view information or leave a condolence, please visit www.danielsfuneral.com.
Strong-Thorne Life Events Center
1100 Coal Ave SE
Albuquerque, NM 87106
505-842-8800

To order memorial trees or send flowers to the family in memory of Garry Richards, please visit our flower store.