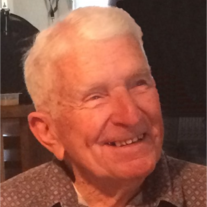 George V. Miller, Jr was born on June 17, 1926 in Morganfield, KY to Anna and George Miller, Sr.   During WW-II he enlisted in the USS Navy at the age of 16 and served five years on the USS Wymas 309 Minesweeper.  After leaving the Navy, George moved to Albuquerque in 1948 and worked for the Albuquerque Fire Department for several years before taking a position with the US Post Office where he retired after 34 years.  George was a builder and remodeler.  He invented several devices for handicapped individuals, one was patented in 1993.  George will always be remembered for his wonderful sense of humor, generous nature, and love of family.
He was preceded in death by his parents; brothers, Samuel, Jack and William; brother-in-laws, Dino Giannini, and Arthur DePoi; and nephew Sheriff’s Deputy James McGrane Jr.
George is survived by his wife Alice Giannini Miller, married 66 years; his daughters, Diana Miller and Theresa Miller; his grandchildren, Melissa Katherman and husband Jason, Jason Smithson, Jessica Etoll, Bryan Smithson, and Gina Etoll Miller and her husband Ben. He is also survived by the little joys of his life, his great-grandchildren Michael George Etoll, Zoey Miller, Jack Katherman and Grey Katherman.  Additionally, he is survived by his sister, Martha Allen and husband Michael, sister-in-laws, Armida DePoi, Rita Giannini McGrane, and Virginia Giannini as well as many nieces, nephews and friends.
Pallbearers include grandson Jason Smithson, brother-in-laws; James McGrane, Charles Giannini and Albert Giannini; nephew, Roger Brothers; and cousin Louis Giannini. Honorary Pall Bearers are Bryan Smithson and Ben Miller.
George’s family wish to thank everyone for their great kindness and generosity during our time of loss.
The Rosary will be held Tuesday, March 8, 2016 from 7:00 PM to 8:00 PM. at Strong-Thorne (Daniels) Mortuary and Visitation between 6:30 and 7 p.m. Mass will take place on Wednesday, March 9, 2016 from 10:00 AM to 11:00 AM at St. Charles Borromeo Church. Interment will be at Mount Calvary Cemetery immediately following the Mass.  In lieu of flowers, donations may be sent to The Deputy James F. McGrane Jr.  Officer Street Survival Training at PO Box 37337 Albuquerque, NM 87176.  To view Service information or leave a condolence please visit www.danielsfuneral.com.
Strong-Thorne Life Events Center
1100 Coal Ave SE
Albuquerque, NM 87106
505-842-8800
To order memorial trees or send flowers to the family in memory of George Miller Jr., please visit our flower store.

Mass of Christian Burial and Resurrection