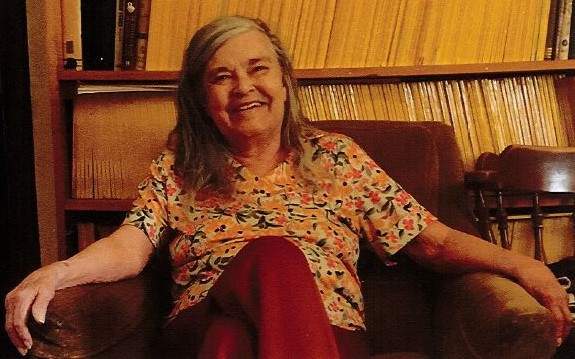 On Saturday, August 25, Holly Norwood McCarthy passed from this life after a prolonged illness, surrounded by her husband, her children, grandchildren, and the kind and caring staff of the hospice unit at Anna Kaseman Hospital.

Born at St. Joseph’s Hospital on Oct. 20, 1937, Holly was an (almost) lifelong resident of Albuquerque. She was educated at Bandelier Elementary, Jefferson Jr. High, and Highland High School (class of 1955). She attended UNM for two and a half years studying Mathematics, and later received a certificate computer programming from Albuquerque T-VI (now CNM). She worked for UNM NMERI as a programmer, and later for CNM Montoya Campus as a Tech Instructor.

A creative person, Holly delighted family and friends with the products of her skill in knitting, sewing, crocheting, embroidery, and other craft work. For many years she was never without a project in process and many of us are warmer and more comfortable as a result.

Holly’s humor, intelligence, and kindness brightened our lives, and she lives in the memories of those who loved her.

To order memorial trees or send flowers to the family in memory of Holly McCarthy, please visit our flower store.