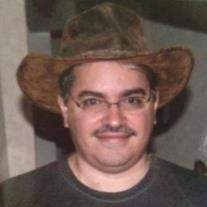 James "Jim" Stevens Cairo, 55, a resident of Rio Rancho for the past 11 years, was called home to our Lord and Savior on Wednesday, July 29, 2015. He was born in Chicago, IL on December 26, 1959, Frank and Grace (Berardi) Cairo, Sr. He earned a B.S. in Computer Science from Roosevelt University. Most recently, he had worked at Presbyterian Medical Services and was praised for his exceptional computer skills, and always being patient with others who were experiencing computer problems. Anyone could call him at all hours of the day and night and he would be the one who could help the most. Jim considered himself to be a numismatic, or an expert in currency. He was an avid collector. His hobbies included fishing, hiking, muscle cars, World War II History,  and cheering on the Chicago Black Hawks, Chicago Bears and Chicago White Sox. Most importantly, he was a main of deep faith who had a very close relationship with the Lord, and was a longtime parishoner of Church of the Incarnation. We praise God that he is no longer sick and hurting. He was preceded in death by his parents, Frank and Grace Cairo. He is survived by his daughters, Anna and Grace Cairo, and their mother, Marie Cairo, all of Rio Rancho, NM; siblings, William Cairo of Riverside, IL, Patrick Cairo, of Berwyn, IL, Frank Cairo and wife, Janet, of Berwyn, IL, and Maryann Zezulak and husband, Mike, of Naperville, IL; and many aunts uncles, nieces, nephews, cousins and friends. The Rosary will be recited at 7:00 PM on Monday, August 3, 2015 at Church of the Incarnation, 2309 Monterrey Rd. NE, Rio Rancho. The Celebration of the Mass of Christian Burial will be held at 11:00 AM on Tuesday, August 4, 2015, also at Church of the Incarnation, 2309 Monterrey Rd NE, Rio Rancho.  Interment to follow at Vista Verde Memorial Park, 4310 Sara Road SE, Rio Rancho.  To view information or leave a condolence please visit www.danielsfuneral.com.
Strong-Thorne Life Events Center
1100 Coal Ave SE
Albuquerque, NM 87106
505-842-8800

To order memorial trees or send flowers to the family in memory of James Cairo, please visit our flower store.

Church of the Incarnation

Church of the Incarnation