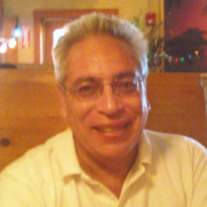 Casias, James (Jim, JC, & Imposter to sports radio).  Jim was born 10/1/42 in Dawson, NM but has resided in Albuquerque, NM most of his life.  He is predeceased by his parents Maximiliano & Ignacita (Agnes) Casias, 2 sisters who died in infancy, his brother Albert (Max) & many aunts, uncles, cousins & in-laws.
He is survived by his wife of almost 50 years, Corina, daughter Celine Cumerford (Steve), daughter Margaret Mary Faulkner (Chris), his grandchildren Amanda Dodge (Dave), Crystin Curio (Jay) & Tyler Cumerford.  Great grandchildren Nathan Mills, “DJ” Dodge, Ambri Buchanan and grand dogs Bella & Sophie.
He is also survived by his sister Marcella & his brothers Arthur, Phillip, Johnny (Polly), Daniel (Gwen) & David plus many nieces, nephews & cousins.
He is a graduate of Albuquerque High School where he was Co-Captain of the basketball team his senior year.  He received his B.S. in Business from St. Joseph’s College on the Rio Grande where he also played guard on the basketball team.  He was also a graduate of UNM where he obtained his Master’s Degree in Economics.
Most of his professional life he worked for local and State government.  He worked in various departments:  Personnel, Budget Analyst for the newly formed City Council in Albuquerque, Internal Audit, The Albuquerque Sunport, and ended his career as Director of Administrative Services for the Department of Finance & Administration for the State of New Mexico.  In his youth he worked for Dixie Floral where he got his love of fresh flowers & bouquets.
He was soft-spoken & the consummate gentleman.  He was caring & loyal to his friends who number many (you know who you are!)  He was a loving husband, father, grandfather & great grandfather.  There wasn’t anything he wouldn’t do for any or all of us.
His services will be held at Calvary of Albuquerque, 4001 Osuna NE on Tuesday, August 30th at 11 am with a reception to follow. Pallbearers:  Brothers; Arthur Casias, Phillip Casias, Johnny Casias, Daniel Casias, David Casias, and good friend, Bill Armstrong.
Honorary Pallbearers: The Hobos, Phil Nelson, Bill Abney, and Bobby Rea.
Services will be conducted by his dear friends Rev. Charles Becknell & Rev. John Dorn & Pastor Eric Lamb from Calvary of Albuquerque.
In lieu of flowers send contributions to St. Jude Children’s Hospital, 262 Danny Thomas Place, Memphis, TN 38105.

To order memorial trees or send flowers to the family in memory of James Casias, please visit our flower store.