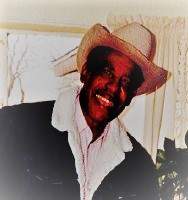 James (Jabo) Holmes, age 84, beloved Grandfather, Father, Brother, Son and Dear Friend passed away on February 24, 2019 after a long battle with Alzheimer’s. He is at peace after a long blessed life rich with family and friends who miss him and remember him fondly. Jab was born in Lubbock, TX. On July 9, 1934 and was raised in Texas before coming to Albuquerque and spending 60 plus years sharing his life in our community. Jab made many friends and acquaintances in the various jobs and positions he held. Amongst these were being a Manager of Furrs grocery store, a skycap at the Sunport, a bell-man at the Hilton Sheraton and running his own restaurant “Jabo’s Café’” in the South Broadway/Stadium area for many years. He enjoyed working with people and around people whether they were on business, vacation or just having a hot meal at his establishment. Most recently he made many friends at the Barelas Senior Center where he will be remembered fondly. He enjoyed being in his yard pulling weeds and spending quiet time outdoors. He had a special bond with his grandchildren and loved the Dallas Cowboys. Jab had a great sense of humor but always made sure to let you know “who was the boss” and letting you know how old he was which was always younger. We are all much richer for knowing this man, the character known as James (Jab) Holmes. He has gone to be with Bernice whom he has missed dearly these past 2 years. James “Jab” Holmes is survived by his sister Thelma Lee Holmes Pattillo; son Rodrick Earl Holmes and wife Marion, son Jerry Mitchell and wife Barbara; granddaughter Bobbi Holmes; grandson Rodrick Earl Holmes Jr.; great-grandson Jalen Ned; a host of nieces and nephews. He is preceded in death by his wife Bernice Holmes, his father D L Holmes and his mother Joanne Evans Holmes; his brothers Jessie (Mutt) Holmes and Bobby Gary Holmes, Sisters Temple Holmes Mason, Betty Jo Holmes, Shirley Holmes Jones. Visitation will be held at Strong~Thorne Funeral Home, 1100 Coal Ave. SE at 10 AM on Saturday, March 9, 2019 with the Funeral Services to begin at 10:30 AM. Interment will follow at Fairview Memorial Park, 700 Yale Blvd. SE.

To order memorial trees or send flowers to the family in memory of James Holmes, please visit our flower store.