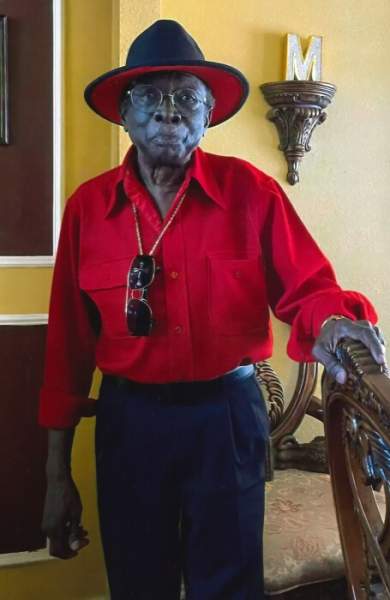 
Young, James G.
James G. Young, Sr. Was born March 15, 1946 in Clarksville, Texas to Charles and Olivette Young.  He was born the 6th of 12 children, in 1954. Charles and Olivette decided to move the family to Albuquerque, New Mexico. Although James was only 8 years old at the time, he had very fond memories of his early childhood in Clarksville and loved to tell stories which usually began with " I remember when me and ol' Donald Wayne used to..." and would go on to share one of his many memories. Upon their arrival to Albuquerque, his father Deacon Charles Young, and mother, Olivette, along with the rest of the family began attending Shiloh  Missionary Baptist Church. James went on to accept Jesus Christ at the age of 13. He would attend San Jose Elementary, Lincoln Middle School, and his beloved Albuquerque High School. In the early to mid 1960's, you couldn't talk prep track and field without mentioning James Young, as he was an outstanding track star. Even though he ran the 100 and the 220 he loved to talk about the old 440, where he held the school record at AHA that withstood the test of time. When he would talk track, he was very complimenting of the other track athletes, but in the end he was very quick to remind you the " they were fast, but they were never fast as me!" He then attended Eastern University for a semester on a track scholarship, but after a hamstring injury he decided to enlist in the US Air Force. He served 4 years, and shortly after returning home, he was hired on as a custodian at Sandia National Laboratories. After only a few months on the job, he secured a position as a security guard where he would spend the next 25 years of his life, enjoying what he did, making many memories and friends that he still has today. 1975, he met Mary Cruz, along with her daughter, Vicky, who he adopted as his own, they went on to marry and have 2 sons, James Jr and Matthew, and spend 10 years together until they decided to separate, but always remained close friends. He would late in his life find out he had another son, Robert Mathis, who he proudly accepted as his own and got to know over the last several years of his life.  Some of James favorite ways to spend his time was cheering on his son at his YAFL football games, as well as hunting and fishing with his two sons and brothers. he also enjoyed watching old movies, Preferably old scary movies, some even in the black and white, but most of all, his appetite could be matched by no other, he loved to eat and cook. Restaurants nearby his home, knew him on a first name basis. James was loved and will truly be missed.

He is preceded in death by his father and mother, Charles and Olivette Young; brothers, Joe, Jerry, David, Cleo, and Donald young and sister, Deloris Jackson, and granddaughter, Maria Young.
He is Survived by his sons, Robert and Lawana Mathis of Dallas, TX, Vicky Young, James Young Jr and his wife Antoinette, and Matthew Young; His grandchildren, Caleb, Robert Jr, and Courtney Mathis, Yoshua, Elijah, and Precious Young, and Isaiah, Moses and Chantelle Young. James siblings, Charles and Mary Young of South Coralina, Eddie and Mary Young, Bobby Young, and Kelvin Young; sister, Novella Maple and many nieces and nephews.

To order memorial trees or send flowers to the family in memory of James Young, please visit our flower store.