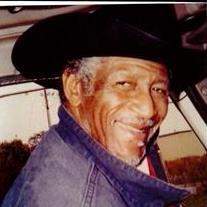 Joe Wesley Irvin passed away at his home on September 24, 2015.  He was a longtime resident of Albuquerque, New Mexico.  He proudly served in the Armed Forces as a airmen during the Korean War Era.  He was stationed at Kirtland Air Force Base where his honorable service ended in 1963.  Thereafter he married Maudie Mae Basped and started a family.
He obtained a nursing degree at the University of New Mexico and began his nursing career at the VA Hospital.  He also worked at the Bernalillo County Medical Center now the UNMH Medical and the University Heights Hospital now the Carrie Tingley Hospital.  He was a jack of all trades but underneath it all He was a COWBOY.  After nursing,  his love for horses guided him to the career of horse training where he trained for various owners and also owned horses of his own.  He trained and raced horses in Albuquerque, Santa Fe, Ruidoso, and Raton New Mexico.  His last occupation was truck driver.  In his senior years you could always find him having coffee at his favorite spot the Flying J Truck stop  on 98th street in his designated chair.
He was the true example of a good Samaritan giving all that he had even when he had nothing but a good conservation to give.
Romans 2:11 For there is no respect of persons with God.  This scripture truly describes Mr. Joe Irvin.  He was not a religious man but was a spiritual man.  He was a father figure to many and a friend to all.  He will be missed.
He was preceded in death by father Alvin Irvin, mother Amie Rentie Gee Irvin and step-mother who raised him Willie Mae Irvin, brother Willis Lee Irvin, and sister Alma Jean Vann.  He was also preceded in death by daughter and grandson Teresa Consuela Scales and Ray Scales Jr. and grandson Patrick Demetrius Irvin.
He leaves to mourn his memory ex-wife Maudie Mae Irvin, son Robert Irvin and wife Kaye, grandkids Latasha, Jeremiah and Robert Jr., daughter Priscilla Cobbs grandkids Tanica, Eugene, April and husband Brandon, and Donte, son. Tyron Irvin and wife Theresa grandkids Dajonique, Jahmal, Britnee, Dominac, and Tyra, son Mark Irvin grandchild Latea, son Nicholas Edward Irvin, grandkids Kaje, and NyAsia, and lastly daughter Rashada Mae Irvin-Stallworth and A’Lyssa, Natanie, Harlem, and Zion.  Great grandkids Dejon. Amarie, Demetruis, Demci, Jeremiah Jr. and Jhavieen and a host of nieces and nephews.

To order memorial trees or send flowers to the family in memory of Joe Irvin, please visit our flower store.