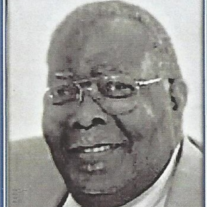 Joe Donald White was born 21 May 1935, in Hominy, Oklahoma to Frank White and Gracie Mae Lewis White. He attended school at Carver School grades 1 through 12. He graduated in May of 1953 as Valedictorian of his class. In the same year he moved to Oakland, CA where he lived with an uncle with the intention of studying Mortuary Science, instead he enrolled in West Contra Coast Junior College and attended for one year. He returned to Oklahoma and joined the United States Air Force on November 15, 1955. He remained in the United States Air Force until December 1, 1981. He was employed with the United States Postal Service until he retired.
He accepted Jesus Christ as his Lord and Savior at an early age and was a regular attendee of church. In 1958 he married Neda Jo Williams. To this union four children were born; August 30, 1961 Joe Donald White, Jr (now deceased), August 27, 1962 Larry Darnell White, October 19, 1964 Nanette Renee White and December 17, 1968 James Allen White.
Joe was the third of three children; Frank White Jr. of Cincinnati, OH and Wilma J. Smith of Tulsa, OK. Both preceded him in death. Joe was a fan of Professional Bull Riding as his older brother was a rider.
Joe joined Mount Olive Missionary Baptist Church in 1987 and shortly after was asked to join the Deacon Board. He was ordained by Rev. Charles Becknell, Sr. Deacon White was very active in the church. He was Chairman of the Trustee Board for many years, introduced and worked diligently in the Feeding Ministry (Project Share) until he retired from it. He would help anybody. His mantra was “say what you mean and mean what you say”.
Deacon White’s first marriage ended in divorce. In September 1994 Deacon White married Nora Porter Jones.
He leaves to cherish his memory his wife Nora, children, grandchildren, five step sons and a host of nieces, nephews and friends. (Special thanks grand-daughter Nakwisha who expressed her love to her “Poppa” by the very special care she gave him).
Visitation, Wednesday August 3,  6:00 pm - 8:00 pm , Funeral service, Thursda,y August 5, at 11:00 am, Mt. Olive Baptist Church, 2401 University SE.
To view information or leave a condolence, please visit www.danielsfuneral.com
Daniels Family Funeral Services
1100 Coal Ave SE
Albuquerque, NM 87106
505-842-8800


To order memorial trees or send flowers to the family in memory of Joe White, please visit our flower store.