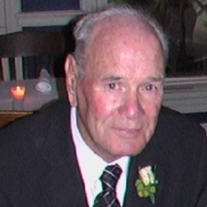 John, the oldest son of John H Jackson Sr. and Helen Holden Jackson, was born in Wichita Falls, Texas on April, 4, 1928.  At 17 John joined the Army and spent time in San Antonio before being assigned to the 8450th Military Police Unit, Manhattan Engineering Project.  He became part of the team responsible for safeguarding nuclear samples and information.  With the army he spent time in Eniwetok, a small island in the Pacific; Oak Ridge, Tennessee; and Sandia Base in Albuquerque.    He recalled escorting nuclear test samples from the Pacific arena to the Pentagon.

Upon honorable discharge he attended a diesel engine mechanics school in Chicago, returned briefly to Wichita Falls then settled in Albuquerque in 1948.   In Albuquerque he worked as an armored vehicle guard which led to the fateful meeting with Norma who was a bank teller. They were married at the Church of Immaculate Conception in Albuquerque on January 20, 1951 and remained so until her death in 2005.

John pursued a future in banking and served as President of the New Mexico Banking Association.  He retired as President of First National Bank of Grants in 1978.   He always retained an interest in mechanic work and cars and was either making loans or tearing down engines.

He and Norma moved back to Albuquerque in 1979.  He played softball; and they traveled extensively throughout the US preferring motorhomes and sightseeing to airlines and motels.

A rosary will be recited at Strong Thorne Mortuary at 1100 Coal Ave SE at 7pm Thursday February 18th  preceded by visitation from 6pm to 7pm, and Funeral Services will be Friday February 19th at 10am at Strong Thorne Mortuary with burial following at Mt. Cavalry Cemetery.   The Pallbearers are nephews Stan Selva, Mitch Rendace, Matt Rendace; grandsons Nicholas Jackson and Hubie Jackson, and friend Leon Esparza.  The family is grateful to the staff at Palmilla for their care this last 15 months.  In lieu of flowers please make a donation in memory of John Jackson Jr.  to Our Lady of Guadalupe Church Building Fund, 1860 Griegos Road NW, Albuquerque NM 87107 c/o Anna Rubio.

Your browser does not support this video format. You should be able to view it in Chrome, Safari or Internet Explorer.
To order memorial trees or send flowers to the family in memory of John Jackson Jr., please visit our flower store.