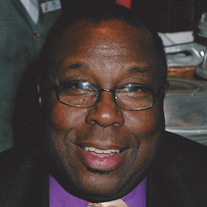 McKeller, John
John McKeller, 71, passed away on Thursday, December 10, 2015.  He was born in Frankson, TX to Mary Bell- McKeller  on March 8, 1944.  John had six brothers and sisters.  He moved to Albuquerque, NM in 1958 with his Aunt Pearl.  John was a graduate from Albuquerque High School in 1964.  He then went into the US Army and served in Vietnam.  After his military service he worked as a truck driver and retired after 25 years.  Though the years John met and married Gwendolyn Moultrie.  Together they parented 6 children; Juanita, Theresa, Tina , Jamaul, Sharon, Tim and who between them have  11 grandchildren and 3 great grandchildren. John is survived by Columbus Skinner (Aunt Babe), 2 brothers; Lonnie McKeller (LA), Isiah (Skip)Massie and a host of nieces, nephews and friends.  In 2013 John married Irma Allen of Albuquerque, NM she had 2 children Brenda and Edwardo Allen and 4 grandchildren.  John will always be Remembered and Loved.  Visitation will be held from 9:00 AM until the service begins at 1:00 PM on Thursday, December 17, 2015 at Strong-Thorne Chapel, 1100 Coal Ave SE, Albuquerque.   To view information or leave a condolence, please visit www.danielsfuneral.com
Strong-Thorne Chapel
1100 Coal Ave SE
Albuquerque, NM 87106
505-842-8800

Your browser does not support this video format. You should be able to view it in Chrome, Safari or Internet Explorer.
To order memorial trees or send flowers to the family in memory of John McKeller, please visit our flower store.