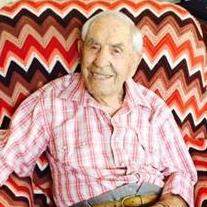 The Obituary of Joseph Louis Filichia
Our beloved father died November 23rd 2015 exactly 2 months shy of his 100th birthday.
Joseph was a proud World War II veteran who served 25 years in the Air Force; while stationed on Tinian was part of the 509th command group. Joseph was the Crew Chief for the Enola Gay.  Joseph was stationed at Kirtland Air Force Base in 1952 and retired in Albuquerque, but worked 20 more years at Sandia Corporation.
Joseph was a dedicated family man who lost the love of his life, Marion, wife of 54 years. Marion died on July 4, 1999.  Joseph loved family, fishing, camping, gardening, and building campers, etc.  Joseph was always helping family, friends, and neighbors.
Joseph was a devout Catholic.  Joseph dedicated many years of his life as a volunteer for the St. Vincent De Paul Society.
Joseph is survived by his children: Jim and daughter In-law Patricia Filichia of Jacksonville, Florida, Francine Hamming from Gurnee, Illinois, and Dee Filichia from San Rafael, CA.  Grandchildren, Jennifer Fitzgerald and Julie Groth.  Great grandchildren, Hudson and Kylie Fitzgerald.
Joseph was loved by many and will be missed dearly. Our father stated that he wished his obituary to read “I am dead, I am gone, Goodbye”.
The Memorial service will be held at the Holy Ghost Church, located at 833 Arizona St. S.E. at 10am on Friday, December 4th 2015. The family will have a Reception to follow at the New Mexico’s Veteran’s Memorial located on Louisiana Blvd. S.E.

To order memorial trees or send flowers to the family in memory of Joseph Filichia, please visit our flower store.