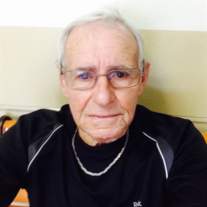 Joseph Peter Meyer, II, 88, passed away on Monday, December 26, 2016. He was born on October 26, 1928 in Conway, AR to Joseph Peter and Ida Therese (Nebholz) Meyer, Sr. He grew up in Conway, AR and served in the US Army in the occupation of Japan after World War II. After his military service, Mr. Meyer spent a short time as a carpenter before joining the ironworkers union. He retired in the late 1980's after a longtime career as an ironworker. He was not one to sit around. He loved to learn about all sorts of topics. On record, he only had an eighth grade education. But, he was the most educated eighth grader. He married his first wife, Barbara, and adopted her son, Mike. He married his second wife, Doris - a widow, and together they raised her five children and had a son between them. Mr. Meyer was preceded in death by his wife, Doris; daughter, Valerie Burge; sister, Dolores; and brother, James Meyer. He is survived by children: Billy Burge, Nancy Kinchen and her husband, Richard, Sandy Burge, Jackie Burge, Robin Burge, and Joseph Peter Meyer, III; siblings, Ida Rose Morgan, Clarence Meyer and Paul Meyer.  A Memorial Ceremony will be held at 1:00 PM on Saturday, January 21, 2017 at Sunset Memorial Park, Albuquerque. To view information or leave a condolence, please visit www.danielsfuneral.com.
Strong-Thorne
1100 Coal Ave SE
Albuquerque, NM 87106
505-842-8800

To order memorial trees or send flowers to the family in memory of Joseph Meyer II., please visit our flower store.