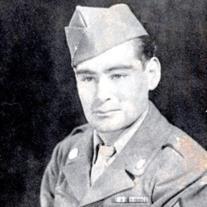 Rael, Juan E.
Age 93, was called home to our Lord and Savior on Monday, April 6, 2015 with his loving family by his side. He was born on January 21, 1922 to Felicito and Catalina Rael of Escobosa, NM. He proudly served in the US Army and was a decorated WWII veteran. He worked for many years as a contractor and mason. He will be remembered for his deep love for his family, going on walks with his wife of 62 years, Ercilia (Jaramillo) Rael, He also had a love for baseball and dancing. He was preceded in death by his daughter, Joann Rael.   Mr. Rael is survived by his wife, Ercilia, of Albuquerque,NM; son, Edward Rael and fiancee, Tillie Martinez, of Albuquerque, NM, daughter, Dora Dillon and husband, Bob, of Albuquerque, NM, daughter, Eduvijen Lopez and husband, Tony, of Albuquerque, NM, son, Kenneth Rael and wife, Julie, of Thoreau, NM, daughter, Rose Hughes and husband, Steve, of Franklin, PA, and son, Stephen Rael and wife, Maria, of Albuquerque, NM; nine grandchildren; 9 great-grandchildren; sister, Augatha Candelaria and brother, James Rael; and many nieces, nephews, other family members and friends who mourn his passing. The Rosary, followed by the Prayer Service, will begin at 10:00 AM on Friday, April 10, 2015 at Strong-Thorne Chapel, 1100 Coal Ave SE, Albuquerque, NM. Interment with military honors will follow at Fairview Memorial Park. Pallbearers will be Richard Candelaria, Leroy Candelaria, Steve Hughes, John Lopez, Benito Rael, Isidro Serna and A. Joe Jaramillo. To view information or leave a condolence, please visit www.danielsfuneral.com.
Strong-Thorne Life Events Center
1100 Coal Ave SE
Albuquerque, NM 87106
505-842-8800

To order memorial trees or send flowers to the family in memory of Juan Rael, please visit our flower store.