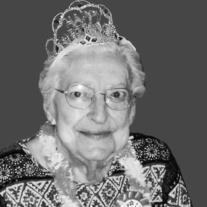 Savage-Montoya, Katherine Kay
Katherine (Kay) E. Savage-Montoya, 97, passed away October 30, 2015.  She was born in Cleveland, Ohio, the only child of John and Katherine Wachsman.  After the death of her mother, she was adopted by her Aunt and Uncle, Andrew and Elizabeth Haner of Cleveland.  She married James Savage in 1941 and had two daughters.  She moved to Albuquerque, NM in 1957.  Her husband of 26 yrs. passed away in 1967.  In 1975, she married Alfred Montoya. He passed away in 2013 after 37 yrs. of marriage.  They really enjoyed going to flea markets together. She retired in 1980 from Sandia National Laboratories. Katherine loved to play the piano and also dance the polka and the chicken dance whenever she had the opportunity.  In Cleveland, she was a member of the Cleveland Sachsenheim.  She has been a member of Beta Sigma Phi International Sorority since 1939 and has held many offices over the years in Cleveland and Albuquerque.  She received the Torch Bearer Degree in 2012.  After her husband's death in 2013, Katherine moved to Tucson, AZ.  She is survived by her daughters, Linda Lewis (Frank-deceased) of Marietta, GA and Juanita Clark (Ed) of Tucson, AZ.  Linda has 3 children and 6 grandchildren, Jeffrey (Stacey) Brooks, Braden and Ryan Elisabeth of Augusta, GA, Jennifer (James) Liam and Connor of St. Simons Island, GA and Janyce Wallis, Emmie of Lilburn, GA.   Juanita has 2 children and 4 grandchildren, Tawnya (Steve) Dacoda and Makena and Michael (Tamara) Kayley and Ashley all of Tucson, AZ. She will always be forever in the hearts of those who knew and loved her. Graveside Service will be held at 11:00 am on Friday, November 6, 2015 at Fairview Memorial Park at 700 Yale Blvd. SE, Albuquerque, New Mexico, 87106.  In lieu of flowers, Memorial contributions may be made to Agape Hospice & Palliative Care, 2980 N Swan Rd. Ste. 222, Tucson, AZ 85712.  To view information or leave a condolence, please visit www.danielsfuneral.com
Strong ~ Thorne Chapel
1100 Coal Ave SE
Albuquerque, NM 87106
505-842-8800


To order memorial trees or send flowers to the family in memory of Katherine Savage -Montoya, please visit our flower store.