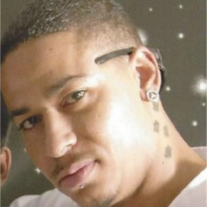 On March 5th in 1983 at the Lovelace Hospital in Albuquerque New Mexico  our lord and savior blessed Mr. and Mrs. Clyde S. Jones and all of us here today with the birth of one of his sons Kenyatta Randy Dewayne Jones. In the following 33 years of Kenyatta’s life he has touched the and heart and souls of us all in so many caring and loving  ways such as a brother, a son, a nephew,  a cousin, a father, a friend, a neighbor and most of all a dearly beloved grandson.
However there were many times throughout Kenyatta’s life that he was not the purest of souls as he faced so many lonely, dark and dangerous times. But as he had endured these times in his life he continuously remained determined to overcome every obstacle that he encountered. As he and I would reflect back onto so many different moments of time in his life with you and others be it good or bad he would always have that charming smile across his face that could turn butter out of margarine and with that infectious laugh of his that could make salt taste like sugar you just couldn’t help yourself but to join in with him and smile and laugh right along. Kenyatta could shine with such charisma it would feel as if he were a magnet just pulling you in good or bad but with him by your side it would be some kind of adventure that you surely never to forget.
On November 8th 2016 back at Lovelace Hospital in Albuquerque New Mexico where Kenyatta’s journey in life and to our hearts began our Lord and Savior was calling Kenyatta to return home.  As our hearts ached and our tears poured down our faces Kenyatta comforted by his loving mother Barbara Hall Jones and his cousins Charles and Evelyn Wardlow whom shared so many memorable times together throughout their lives said their final goodbyes. Kenyatta to his glory proceeded on to death by his loving grandparents Erma and Leo Hall along with his grandfather Randy Jones and father Clyde Jones. Kenyatta is survived by his mother Barbara Hall Jones, Grandmother Catherine Jones, Godmother Kathy Hosea, his four brothers Devonte and Deonte Ewell, Davon and Calvin Jones, his two sons Josiah and Casien Marquez, his dearest cousins Charles and Evelyn Wardlow and all their children along with a large host of family members, friends and loved ones.

To order memorial trees or send flowers to the family in memory of Kenyatta Jones, please visit our flower store.