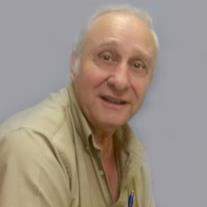 Larry was born in Italy and raised in Highland Park, Illinois. Following his graduation from Highland Park High School he worked for Menoni & Mocogni until his initial retirement. He returned to work in the family business, Sunset Foods, until 2001 when he moved to New Mexico with his family.

Larry had a kind heart and a gentle soul. His presence was always uplifting and had a calming effect on everyone he met. He was always willing to lend a helping hand. Larry loved his family unconditionally and showed that love in many ways. His kindness was evident in every interaction. He was the quintessential husband, father and man. He will be loved and missed by all, but we know he is in the hands of God. We will certainly join him in God's loving arms if we choose to live by Larry's example.

To order memorial trees or send flowers to the family in memory of Lawrence Cortesi, please visit our flower store.