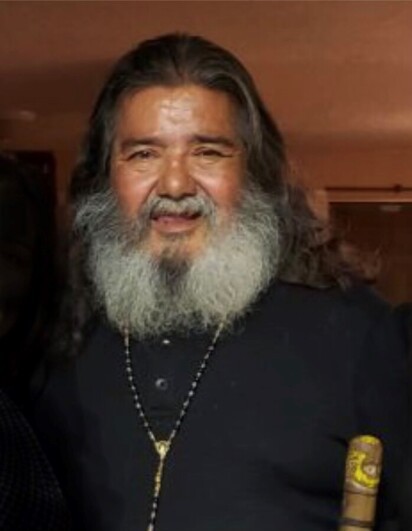 Tapia, Lawrence A.
Lawrence Anthony Tapia Sr. who we all knew as, “Larry”, passed away on January 19th, 2022.
Larry was born on August 10th, 1952 in Albuquerque, NM. He grew up and lived the majority of his life in the heart of Old Town.
He was a generous, kind, hardworking, thoughtful and loving man.
His favorite hobbies were spent mostly outdoors either enjoyed solemnly or with his friends and family. Rain or shine, you’d find him walking the flea market every weekend, cruising the streets with his New Mexican music playing in the background, catching a fish or two from the freshwaters and spending time with his grandchildren.
Larry is in a safe place now and is reunited with his two sons, Antonio Alonso Tapia and Lawrence Anthony Tapia Jr; his mother, Joann Vigil; his father, José Maria Tapia; his brother, George Tapia; his step brother, Felix Vigil; and all of his friends and family who left before him.
Larry has now parted from his ex-wife, Clara Tapia; his two daughters, Erika Smith and Tanya Tapia; his daughter-in-law, Christy Romero; his son-in-law, Neil Smith Sr.; his sister, Shirley Pohl; his sister-in-law, MaryLou Tapia; his step-brothers, Jessie Vigil and his wife, Teresa; Donald and Harry Vigil; his aunt, Diana Garcia; his uncles, Joseph Dimas and Steve Dimas and his wife, Rosemary; and lastly, his grandchildren who were his world; Cesar Rios and his wife, Daniella; Neil Smith Jr. and his girlfriend, Mia; Gabriel Smith; Andrea Rios; Nathaniel Smith; Arianna Rios; Nadia Romero; and lastly the youngest, Anahi Tapia. Including numerous relatives and friends.
Larry was someone who had a heart of gold, you could count on him at any time, and will be missed dearly by many of his friends and family. This is not a goodbye but a see you later. May his kind soul Rest in Peace.
Services will take place at San Felipe de Neri Catholic Church, 2005 N. Plaza St NW Albuquerque, NM on Saturday, March 5th.  The rosary will be held at 9:30am, following mass at 10:00am. Reception to follow at West Mesa Community Center, 5500 Glenrio Rd, NW. To view information or leave a condolence please visit www.strongthorne.com
Daniels Family Funeral Services
1100 Coal Ave SE
Albuquerque, NM 87106
505-842-8800

To order memorial trees or send flowers to the family in memory of Lawrence Tapia, please visit our flower store.