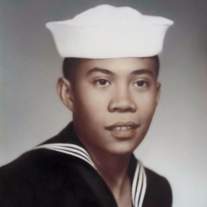 Passed away peacefully on Friday, January 29, 2016, surrounded by loving family. Leonardo was born on November 6, 1931 in Ibajay, Aklan, Philippines, to Placido and Teresa.

In 1954, Leonardo joined the United States Navy and proudly served until 1974, when he retired as Chief Petty Officer, in Albuquerque. During his service, Leonardo served aboard the USS Basilone (DD-824), a Gearing-class destroyer. After retirement Leonardo worked at the Duke City Café in southwest Albuquerque for over 15 years.

Affectionately called “Pa,” by the many who love him, Leonardo dedicated himself to sponsoring his siblings’ immigration to the United States so that they could experience the same opportunity he was given in the U.S.  It was from those efforts that dozens of Oczon family members now prosper in Albuquerque, something that made him very proud. Leonardo was a voracious reader of Old Western books, loved word search puzzles and watching sports on television. Leonardo’s greatest joy in life was Arsenia, who loved him and cared for him for over 70 years.

Leonardo was a wonderful husband, father, grandfather, brother, uncle, and friend, and his family and friends will miss him greatly.

To order memorial trees or send flowers to the family in memory of Leonardo Oczon, please visit our flower store.