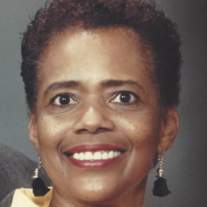 
The life of service, love and devotion to God came to an end on Saturday morning, April 9, 2016 for Lorraine Chelf.
Lorraine was born on April 25, 1945 to the Rev. Willie Sr. and Lucy Holly in Goodpine, Louisiana. Her parents preceded her in death along with her siblings, Willie Jr., Theodore, Vernes, Ernestine, and Vonzella.
While being educated in the public schools of Goodpine, Lorraine loved sports and played on the girls’ basketball team and other team sports.  Although short in stature she was a tenacious and competitive player. After graduating from Goodpine School, she attended Grambling University (Grambling, LA) she then moved to Tucumcari, NM to live with her brother and wife the Rev.  Wilson and Willie Lule Holly. A few short months later she moved to Albuquerque to attend the Technical Vocational Institute where she graduated with a degree in Business Administration.
At an early age Lorraine gave her life to Christ at the Trout Creek Baptist Church where her father pastored. Her love for the Lord continued to grow throughout her life. Lorraine was a devoted Christian woman, kind-spirited, full of life, and heart of Gold!  The gift of speech was embedded in her at young age. Which led to awards and honors in several organizations. Her gift led her to inspire, teach and mentor others throughout her entire life. She was a giving woman, who would give you her shoes off her feet, (and she loved her shoes)
Lorraine met the love of her life Glen E. Chelf, where they later married on September 4, 1971. To this union she was blessed to be the mother to five daughters and two sons. Through her love and vision for family she felt led to organize the Holly-Harrison Family Reunion 44 years ago.
Lorraine joined Shiloh Missionary Baptist Church in 1971 under the leadership of Rev. Dr.  L. E. Hightower. She wore many hats in her local church at Shiloh. She served as President of Young Matrons’, W.M.U, and Senior Choir. She also served as a Director of B.T.U., Youth and Sunday School Teacher. She became involved with the work of the New Hope District Association, where she fulfilled other duties, such as President of Women’s Missionary Union and Least We Forget Program. She continued her love for God and His Church through her ministry with the State and National Conventions.  There too, she held many positions in the Mount Olive Missionary Baptist State Convention such as, First Vice President of the W.M.U., Director of the Youth in the State Congress of Christian Education, and Treasurer of the MOMB State Music Choir.  She became a member of the Fellowship Missionary Baptist Church in 2004, under the leadership of Pastor Dennis G. Dunn.  Soon after she became a Sunday School Teacher and was a member of the Women’s Union.
She was employed by the Albuquerque National Bank, later she took on the true love and ministry of her life by working for the Neighborhood Nursery in teaching children.  She then took a sabbatical from the workforce to raise her own children and to be a part of her grandchildren’s lives. Later returning to workforce to go back to teaching children at Fellowship First Fruits Academy.
Lorraine was a mother to all, her home was your home, her heart was your heart, and her belt was not necessary if you were given the eye and the stern voice. She knew not a stranger, she loved you because she first Loved God. She displayed love through her laughter, cooking, sewing, crafty visions, attention to details and unselfishness to be there if you needed her.  To know her was to know she was a “fashionista”, who enjoyed her shoes, suits and hats.  She kept her husband sharp and her children clean, including her grandchildren.
Her radiant smile warmed you like dawn of the sun on a crisp spring morning, you will never forget it.
Lorraine is survived by her loving husband of 45 years who will for ever cherish her memory, five daughters, Rosalind (Shawn), Rebecca, Karen, Rachel, Jacquelyn, two sons, Glen Jr, and Christopher (Crystal), four Brothers, Wilson (WIllie Lule), Earl, Lionel (Alice), Lawrence (Rosalyn), one Sister Ora Grace, twenty Grandchildren, eight Great Grandchildren, host of nieces, nephews, cousins and a host of friends.


Your browser does not support this video format. You should be able to view it in Chrome, Safari or Internet Explorer.
To order memorial trees or send flowers to the family in memory of Lorraine Chelf, please visit our flower store.