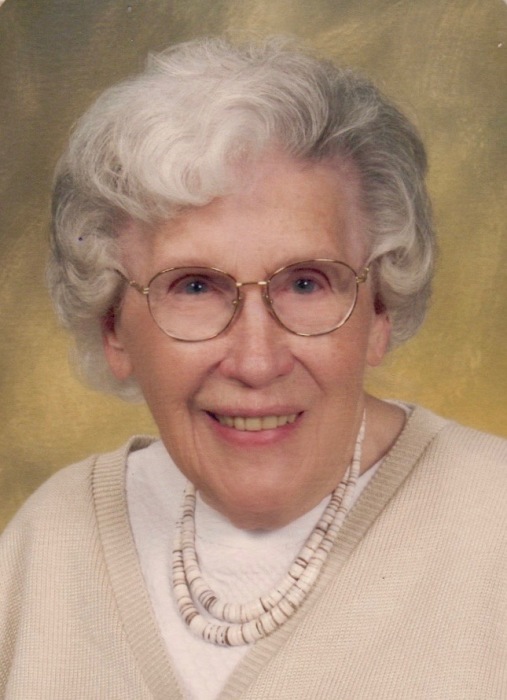 LOUISE M. CRISS passed away peacefully at home in Albuquerque, NM on June 18th.  A mother, a grandmother, and a great-grandmother she was the family peacekeeper and their wellspring of unconditional love.  She always demonstrated strength and grace when faced with adversity.  She had a keen mind, a quick wit, and the most beautiful blue eyes.  She was devoted to her family but always found time for her other passions; gardening, lunches with her girlfriends, her grandchildren, and her career.  She was never idle!

She was born Louise Frances Maus on March 25, 1919, to Roy and Retta (Clymer) Maus on their farm near Ainsworth, Nebraska.

She graduated from Lincoln (NE) High School in 1936 and completed a two-year program in secretarial studies at the University of Nebraska.  She was a member of the Beta Sigma Phi sorority.

Louise was a Civil Service employee for 25 years during which time she worked for several agencies including the U.S. Air Force and the Atomic Energy Commission.  After retiring from Civil Service she started her second career at Los Alamos National Laboratory and retired a second time in 1983.  She always recalled with personal satisfaction that as a young working woman, she was able to buy her own car and take her parents on vacation.

When her first marriage ended in divorce, she hooked a house trailer to the back of a station wagon, loaded-up her two young sons and moved to Albuquerque, NM.  Three years later, she loaded the boys up again and moved to Los Alamos, NM.

In 1966 she married Filmore Criss and welcomed his 3 children into her heart.

When Fil passed away in 1999, Louise returned to Albuquerque where she joined the First United Methodist Church and volunteered with their weekly Grace meal for the needy.

Louise was preceded in death by her husband, Filmore Criss and her brothers; Floyd and Sterling Maus.

Services will be held at 10:00 am on Saturday, July 7th at the First United Methodist Church in Albuquerque (315 Coal Ave., SW.) and will be followed by a reception for family and friends at Sandra Green’s Home (819 Parkland Circle, SE.).  There will be a simple graveside service for family at the National Cemetery in Santa Fe.

For their care and love of Louise, the family thanks everyone at Sandra Green’s Home, Ambercare Hospice, and the First United Methodist Church.

It was Louise’s wish that, in lieu of flowers, donations be made to the Grace Meal Ministry at the First United Church ( finance@firstumcabq.org ).

“Say not in grief she is no more – but live in thankfulness that she was”.

To order memorial trees or send flowers to the family in memory of Louise Criss, please visit our flower store.