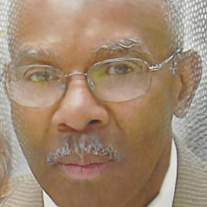 Lue James Jackson was a man of God whose lifestyle exemplified the “Fruits of the Spirit,” love, peace, patience, kindness, goodness, faithfulness, and gentleness.  This illustrious gentleman was born on April 8, 1935 in Lexington County, S.C.  Lue  (“Man,” as he was affectionately called) was the sixth child of 13 siblings born to the union of Mr. Samuel Jackson, Sr., and Mrs. Hattie B. Jackson.  He united with the Heyward A.M.E. Church family in Gaston, S.C. at an early age and accepted Jesus as his personal Savior.

Lue matriculated through the public schools of Lexington County and graduated from Lakeview High School.  He enlisted in the United States Air Force in July of 1955 and received an Honorable discharge in December, 1959.  He later relocated to Philadelphia, PA where he worked at the United States Post Office for over 14 years.  On November 14, 1974, he was employed by the Department of Treasury, through the United States Customs Service, where he served as a U.S. Customs Patrol Officer.

Through his employment, he transferred to Albuquerque, N.M. in 1988.  Here he met his best friend and the love of his life, Elizabeth (Liz) Jackson, and they later married on September 20, 1991.

On April 27, 1990, he graduated from the United States Customs Service Academy in Glynco, GA under the Federal Bureau of Investigation (FBI) with certification in Criminal Investigation, Basic Law Enforcement and a qualified Sharp Shooter.  He retired as a U.S. Customs Border Patrol Agent after 24 years of service in November, 1994.

Lue became a dedicated member of Fellowship Missionary Baptist Church and he was baptized in 1992.  He was later ordained as a Deacon in 1996 under the spiritual leadership of Pastor Dennis G. Dunn.  He served as Vice-Chairman of the Deacon Board from 1997 to 2003.  He also served faithfully on the Trustee Board, Men’s Ministry and Transportation Ministry for Fellowship and First Fruits Christian Academy.

Deacon Lue will always be remembered for his passion to pray.

To order memorial trees or send flowers to the family in memory of Lue Jackson, please visit our flower store.