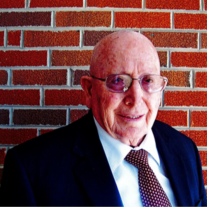 He graduated from Tustin High School in Tustin, CA and Cal Poly in San Luis Obispo, CA as an Electrical Engineer. He tested the Engines for the Apollo program for NASA. He designed an instrument to determine if there was life on Mars for the Viking Lander.

He served in the US Coast Guard as a Radio Operator.

He was preceded in death by his parents along with his brother, Darrell.

Viewing and Visitation will be held from 1:30 PM until the start of the Funeral Service at 2:00 PM on Saturday, November 11, 2017 at The Church of Jesus Christ of Latter-Day Saints, 12701 Indian School Road NE. Interment with Military Honors will be held at 1:30 PM on Monday, November 13, 2017 at Santa Fe National Cemetery, Santa Fe, NM,

To order memorial trees or send flowers to the family in memory of Lytle Williamson, please visit our flower store.