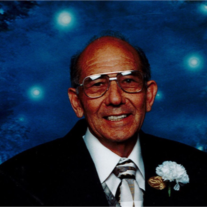 Manford Peralta, Jr., age 82, was born in Albuquerque, NM on October 20, 1935 and passed away on Tuesday, November 14, 2017. He was married to Lucy Peralta for 61 years. They met while they were in school and became lifetime sweethearts, companions and best friends. He was a devoted husband, father, grandfather, friend and home provider. He was a self-made man and an entrepreneur of all trades. If it needed to be built, he built it and, if it needed to be fixed he fixed it.  He was a contractor, builder, gardener, electrician, plumber, paver, cabinet maker, car builder, mechanic, engineer, floor layer, roofer, landscaper, painter, toy maker, dog sitter, sportsman, lamp maker, ice cream maker, pin curler, “marcha” leader, … He worked for Fitzgerald Ice Cream, Creamland and Borden’s Dairies.  He was most proud of the home he built for his family and the extended family that gathered around his home throughout the years. He vacationed regularly with his family and friends and participated in all family events, sports and special activities. He was a devoted catholic at St. Francis Xavier and St. Charles Borromeo Churches.  He was preceded in death by his loving wife Lucy Peralta and his parents Manford and Helen Peralta Sr. He is survived by his four children and their families, Lucille and Joseph Carter, Marlene Johnson, Sharon and Ken McManis, and Glenda and Tommy Gutierrez; 8 grandchildren, Crystal Garcia-Vigil, Dawn Atler, Michael and Holly Johnson, Brandon and Justin McManis, Thomas Ray and Gabriela Gutierrez; 9 great-grandchildren, Estrella Garcia-Vigil, Antonio Vigil, Serena Garcia-Ruiz, Marissa Atler, Thalia Garcia, Nikki, Nathan, Jaina and Jacee Johnson, Matai Gutierrez, and 1 great-great-grandchild, Dimitri Garcia-Ruiz. He is survived by one sister, Ruby Archuleta. The viewing will be held from 6pm until the Rosary begins at 7:00 P.M. on November 21, 2017 at Daniels/Strong-Thorne Mortuary, 1100 Coal Ave SE. A Communion Service will be held at 10:00 A.M. on Wednesday, November 22, 2017 at St. Charles Borromeo Catholic Church, 1801 Hazeldine Ave SE, and followed immediately with interment at Sunset Memorial Park. Manford’s spirit, wisdom, faith and strength will always be with us for eternity. He will never be forgotten.

The family would like to extend its deepest appreciation to those who supported them during their time of need.

To order memorial trees or send flowers to the family in memory of Manford Peralta Jr., please visit our flower store.