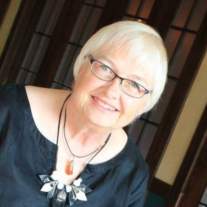 Mara Edwards, 69, passed away on Thursday, August 31, 2017. She was born in December 1947 in Salzburg, Austria to Teodors and Ruta Spigers. In 1969 she graduated from Cleveland State University with a Bachelor's of Science Degree in Biology. In 1972, she earned her certification from Deaconess School of Medical Technology. Mara was a Medical Technologist for 42 years. She enjoyed helping others. Upon her retirement, she was able to spend more time with her creative hobbies that included art, watercolors, sculpture and gardening.

Mara was preceded in death by her father, Teodors Spigers. She is survived by her sons, Trevor Edwards and his fiancée, Theresa Rogers; Ted Turpish and his wife,Jennifer, of Albuquerque, NM; grandchildren, Reese and Tenley Turpish, of Albuquerque, NM; mother, Ruta Spigers, and sister, Rita Yusko, both of St. Charles, IL; and former husband who has remained a close friend, Rodger Edwards.

To order memorial trees or send flowers to the family in memory of Mara Edwards, please visit our flower store.