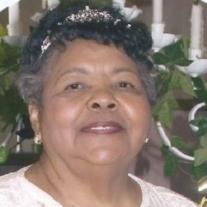 Margaret E. Gray was born on March 1, 1930 to Willie and Juanita Gray in Muskogee, Oklahoma.  She had seven siblings (Willie Jr., Cecil, Thomas, Cornelius, Earl, Francis, and Kenneth).  All of them preceded her in death. Margaret accepted Christ at a very early age.  She served the Lord and the church faithfully. As a teenager, she traveled with her church youth choir and served as a Sunday School delegate at various Methodist Conferences.  She was crowned football queen for two consecutive years during her high school years. She was a member of Delta Sigma Theta Sorority for 62 years and a Charter Member of the Albuquerque Alumnae Chapter; established March 18, 1967.  There were two passions she had outside of her family; her Church (Grant Chapel AME) and her Sorority (Albuquerque Alumnae Chapter of Delta Sigma Theta).  Margaret was one of the first black teachers in the Albuquerque Public Schools.  During her 30 years of teaching she impacted many young lives. One of her former students, now a doctor, recognized Margaret’s voice during a routine doctor’s visit.  The former student shared with Margaret how influential she had been, as a teacher, in her life.  She thanked Margaret for being such a good teacher.  Margaret retired from teaching in 1988. Margaret was married to Kenneth J. Carson, Sr.  During this union, they had three children (Kenneth Jayauthur, Michael Gerald, and Dr. Martiece Juanita Carson).  Ken loved and cherished his wife for 61 years and was always there for her.  On the precipice of her illness that resulted in her transition from this life; Ken was there.  His was the last familiar human voice of love she heard. The Life, the Love, and the Legacy of Margaret Carson will live on in the hearts and minds of all who knew her. Margaret Carson leaves to cherish her fun memories:  husband, Kenneth Carson, Sr.; Two sons, Kenneth (Teresa) and Michael (Theresa) Carson; One daughter, Dr. Martiece Carson; Four grandchildren, Reina, TreChelle, Joshua, and Keyanna; Two sister-in-laws and a host of nieces, nephews, cousins and friends. The Memorial Services will be held Tuesday, June 30, 2015, 11:00 a.m. at Grant Chapel AME Church, 7920 Claremont Ave NE.  Burial will be immediately after services at Fairview Memorial Park, 700 Yale Blvd SE. To view information or leave a condolence, please visit www.danielsfuneral.com. Service arrangements have been entrusted to the care of:
Strong-Thorne Life Events Center
1100 Coal Ave SE
Albuquerque, NM 87106
505-842-8800

To order memorial trees or send flowers to the family in memory of Margaret Carson, please visit our flower store.